Greenfield, Howard. Marc Chagall. New York: Harry N. Abrams, Inc. 1990.
“Examines the life and work of the painter whose Russian Jewish background did not prevent him from making an international search for his own ways of expression.” – WAFMS. Recommended for readers twelve-years-old and up.

Hong, Chen Jiang. Mao and Me. Enchanted Lion Books, 2008.
Writer and artist Chen Jiang Hong tells the story of his Chinese childhood during  the 1960s. The finely detailed pen-and-ink and paint illustrations add emotional power to a quiet, understated memoir of the upheaval created by the Cultural Revolution. 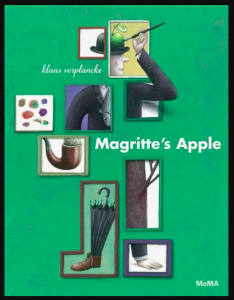 Waldron, Ann. Who Was Paul Monet? New York: Grosset & Dunlap, 2009.
“Claude Monet is considered one of the most influential artists of all time. He is a founder of the French Impressionist art movement, and today his paintings sell for millions of dollars. While Monet was alive, however, his work was often criticized and he struggled financially.” – WAFMS. An easy-to-read biography for readers 10-years-old and up. 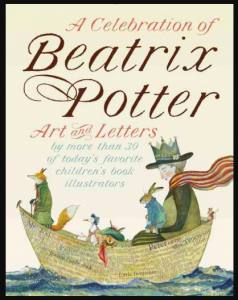 Raczka, Bob. Art Is… Brookfield, Conn.: Millbrook Press, 2003.
“Rhyming text and photographs show that art is much more than just what can be hung on a wall or set on a pedestal.” – CIP. Portrays 26 famous works of art. Recommended as a read-aloud for readers 8-years-old and up. Wenzel, Angela. 13 Art Mysteries Children Should Know. Munich: Prestel, 2011.
Who invented oil painting? Why does the Mona Lisa have a smile on her face? What did Jesus look like? These questions and 10 more are all answered in this 45-page book filled with colour illustrations. A time line on each page adds historical context. Recommended for art lovers 11 years old and up. 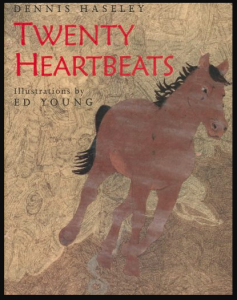 Haseley, Dennis. Twenty Heartbeats. New York: Roaring Brook Press, 2008.
We are often so sure of our thoughts. So sure of our beliefs. Sometimes, though, we are so wrong that when we discover our error, we can scarcely breathe. That abrupt enlightenment is at the heart of this picture book illustrated by the inimitable Ed Young.
A wealthy man hires an artist to paint a picture of his favourite horse. Years pass. The painting does not arrive. Finally, in rage, the man goes to the artist. Where is the painting? What has taken so long?
This elegant reflective story is recommended for readers and listeners six years old and up. You’ll smile and listen differently afterwards. Cottrell Boyce, Frank. Framed. London : Macmillan Children’s, 2006, c2005.
“Dylan and his sisters have some ideas about how to make Snowdonia Oasis Auto Marvel more profitable, but it is not until some strange men with valuable paintings arrive in town and their father disappears that they consider turning to crime.” – AR. [Art; Automobiles; Business enterprises; Eccentrics and eccentricities; Family life; Wales] Ellis, Deborah. Jackal in the Garden: An Encounter with Bizhad. New York: Watson-Guptill Publications, 2006.
“Born deformed, Anibus is considered cursed and is left in the desert to die, but after being rescued and raised in secret, she leads a nomadic life, finding acceptance with a colony of artists which includes Kamal al-Din Bihzad, the most famous master of Persian painting.” – CIP. [Afghanistan; Artists; Nomads; People with disabilities; Runaways]

Henkes, Kevin. The Birthday Room. New York: HarperTrophy, 2001, c1999.
“When twelve-year-old Ben visits his uncle in Oregon, he feels caught in the strained relationship between his mother and her brother while he also begins to accept himself as an artist.” – OhioLINK [Artists; Mothers and sons; Oregon; Secrets; Uncles] Kongisburg, E.L. From the Mixed-up Files of Mrs. Basil E. Frankweiler. New York : Dell, 1973, c1967.
“Claudia and her younger brother run away from hom and end up hiding out in a museum where they discovers a mystery connected to the famous artist, Michelangelo.” – WAFMS. The 1968 Newbery Medal winner. [Artists; Brothers and sisters; Michelangelo; Museums; New York City; Runaways] Lisle, Janet Taylor. The Art of Keeping Cool. New York: Atheneum Books for Young Readers, 2000.
“In 1942, Robert and his cousin Elliot uncover long-hidden family secrets while staying in their grandparents’ Rhode Island town, where they also become involved with a German artist who is suspected of being a spy.” – CIP. [Artists; Cousins; Family life; Grandparents; WW 2] Lowry, Lois. Gathering Blue. Boston: Houghton Mifflin, 2000.
“Lame and suddenly orphaned, Kira is mysteriously removed from her squalid village to live in the palatial Council Edifice, where she is expected to use her gifts as a weaver to do the bidding of the all-powerful Guardians.” – CIP A companion to the Newbery Award Winner ‘The Giver’. [Artists; Orphans; Physically handicapped; Science fiction] Mack, Tracy. Drawing Lessons. New York: Scholastic Press, 2000.
“Twelve-year-old Rory begins to lose the passion for making art that she shares with her father after she finds him kissing his female model and fears for the safety of her parents’ marriage.” – CIP. [Artists; Divorce; Fathers and daughters] Patterson, James. Middle School, Get Me Out of Here!  New York: Little, Brown and Co., 2012.
“After surviving sixth grade, Rafe expects seventh grade to be a fun zone because he has been accepted to art school in the big city, but when he discovers it is more competitive than he expected, he sets out to turn his boring life into the inspiration for a work of art.” – WAFMS. [Art students; Behaviour; Family problems; Schools]

Reiss, Kathryn. Blackthorn Winter. Orlando: Harcourt, 2007, c2006.
“An idyllic seaside artists’ colony in England is the scene of murder, and fifteen-year-old American-born Juliana Martin-Drake attempts to solve the crime while unraveling the mystery of her own past.” – CIP. An entertaining mystery for readers 12 to 16 years old. [Adoption; Artists; Dating (Social customs); England; Family life] Schmidt, Gary D. Okay for Now. Clarion Books, 2011.
Fourteen-year-old Doug has just moved to a small town in New York State. He has a mean older brother and an abusive father. He can’t read and he has no friends. But slowly he makes friends with a classmate, with his teachers and with a librarian who teaches him how to draw. And after his oldest brother comes back from Vietnam, life starts to change at home, too.   [Family life; Fathers and sons; New York (State); Schools; Friendship; Drawing; Violence; Child abuse; Audubon, John James; Theater; Brothers; Vietnam conflict, 1961-1975; Moving, Household; Dating (Social customs)]