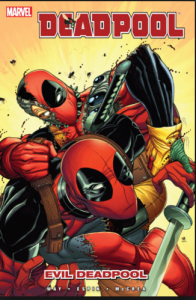 A Literary Analysis by Keenan

My connection to Deadpool: Evil Deadpool by Daniel Way is text to text and text to world.

This book reminds me of other Marvel books I have read in the past. This Marvel book talks about Deadpool and how he convinces the NYPD and Captain America that there is a clone of himself. I have read multiple books about Captain American and other Marvel characters.  Another Marvel book is Deadpool Kills the Marvel Universe.  These two books both have humour but they also have alot of violence and blood.  In this book there are alot of guns and bombs used.  Deadpool threatens that he was going to blow himself up with a child in the car to get Evil Deadpool’s attention. These two Deadpool books remind me of the other Deadpool books.