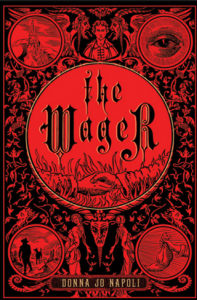 Another Literary Analysis by Tristan

This novel is published by Henry Holt and Company, which began publishing in 1866, so it is one of the oldest publishing companies in the United States.   It is known for publishing books that win awards and are written by famous authors, such as Robert Frost and Robert Louis Stevenson. The author of this book, Donna Jo Napoli, has won at least two literary awards, so I expect to find this novel to be well written.

This novel is an example of a chronological pattern, main character, and problem-solving pattern book.  The events in the story build on each other in a chronological pattern, with events related to each other.  There is a main character, named Don Giovanni, who used to be the richest man in all of Sicily until a tsunami destroyed everything he had.  He made a wager with the devil in order to regain what he had lost.  I’m not sure you can call it person vs. person or person vs. nature, since it is the devil with whom he is wagering.  There is one main problem throughout the story, which is solved at the very end of the book.   Cultural concepts about Italy include continual references to a breakfast of stale bread and milk.

I enjoyed the descriptive language that created clear visualizations that helped me to understand the story.  The story was set in Messima, Italy, and that also grabbed my attention and appealed to me.  I liked the unique struggles that occurred throughout the book.  It was unpredictable and I found that kept my attention.

The story is told from the third person, observer point of view.

The story is told in the past tense.

This story was more difficult for me to connect with, due to the fact that it is set in the past, in Italy, where I have never been, and that the challenges the character faces are based on a wager with the devil.  I haven’t read any other books with the devil, nor do I know anyone who has wagered with the devil that I can connect text to text, world or self with.  The part that I could connect with was that the agreement Don Giovanni made was a contract. This I have two connections with.  In a text to self connection, I have signed a behaviour contract for school, but also when I attend CISV mini camps and when I went to CISV Village in Fredericton for a month.  I had to follow that contract and if I broke it, I would have consequences – the most severe being sent home from camp.  I didn’t have a problem with following most of the rules, but at times I would have liked to have been able to email home and check my mom was okay.   It wasn’t allowed in the contract, so I had to wait it out, like Don Giovanni had to wait until the time ran out on his wager.