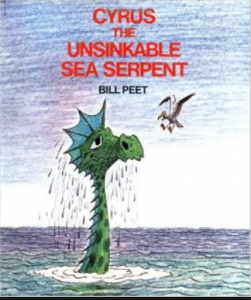 Another Literary Analysis by Keenan

I know this author to be reliable because he has written and illustrated more than 30 humourous books for children. He became Walt Disney’s greatest storyman during his 27-year career, making animated films such as Pinocchio, Fantasia, Dumbo and 25 other Disney films. All of his books were published by Houghton Mifflin Company and remain active in print today.

I think the category of this book is a problem-solving pattern because in this picture book the problem was solved in the middle of the book. Pirates were trying to take over a ship by destroying it. Cyrus, the serpent, saw that they were trying to blow the ship up and so destroyed the pirate ship instead. He then took the ship with the passengers and the crew safely to their destination.

Cyrus, a sea serpent, has to decide whether to allow pirates to destroy a ship with innocent people on board or help the ship get safely to its destination. This 46-page picture book, written from the third person point of view, shows the struggle of deciding whether to do the right thing or allow pirates to hurt innocent people. Recommended for readers aged 10 – 14 years old.

Connection: text to self

This book reminds me of a time when my Grandpa Brent from Penticton told me and my cousin Riley there was a lake monster called the Ogopogo. The legend says that the Ogopogo resides in the Okanagan Lake between Penticton and Kelowna and has been sighted by many people. My Grandpa described it as a fierce lake monster with a green snakelike body about 25 meters long, which is very similar to the way Cyrus the Sea Serpent looked in the illustrations in the book. Riley and I became afraid of this lake monster and thought it was dangerous and would tip our boat or eat us if we went for a swim. We did not want to go into the lake at all for several days until my Grandpa finally told us that its just a legend, so we were not scared anymore. After reading this book, it made me wonder if the legend is actually true because there are many similar stories depicting a Sea Serpent type monster in lakes and oceans around the world. I wonder if Cyrus will appear one day and save a ship stranded in the ocean?