Jalem reflects on a story about World War II. 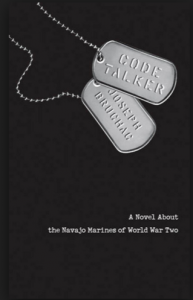 “After being taught in a boarding school run by whites that Navajo is a useless language, Ned Begay and other Navajo men are recruited by the Marines to become Code Talkers, sending messages during World War II in their native tongue.” – FVRL. [Cryptography; Navaho Indians; World War, 1939-1945)

”Have you ever had a friend who you thought you were pretty close with but that’s actually the opposite of what they thought?

Have you ever had one thing in school or at home that was so interesting and just made you so happy to learn about?

Do you have anything that you fear a lot like water or heights? Does it scare the pants off you?

Have you ever been told by somebody that you suck at something over and over until you actually believe it only to learn that the opposite is true?

Have you ever gone somewhere like camp and felt such an urge to go back home and when you finally get home, all you want to do is go back?

This novel is about how a Native American boy goes through the troubles to enlist in the military during World War II despite being only fifteen years old. Once he is in the military, he becomes a code talker. I used to think Native American and aboriginal people did not want to cooperate with European Americans in any way and just wanted them to get off their land or just die. I thought that way because all the stories, books, and movies that I have watched and read have them being that way. An example would be Pocahontas where the British and the Indians are always in a conflict and the movie even refers to the Indians as savages, red necks, and devils. Another example would be a movie called The Revenant where the British men are going hunting to get meat and fur when out of nowhere a group of Indians just pop out and for no reason start to attack and murder the British men and leave them stranded in the middle of the forest. This novel [by Bruchac] showed me that that is not always how it was. The native Americans actually contributed quite a lot in World War II. They served well as soldiers as well as code talkers that spoke code to help the Americans as double agents. This novel taught me just how much the native Indian people actually contributed to both Canada and America.