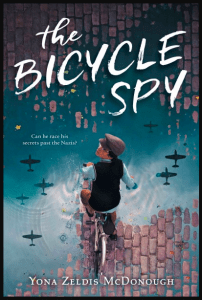 McDonough, Yona Zeldis. The Bicycle Spy. New York: Scholastic Press, 2016.
Twelve-year-old Marcel – riding his bicycle and dreaming of racing in the Tour de France – discovers that he is delivering more than bread from his family’s bakery. He is delivering secret messages that must be kept hidden from the German soldiers who have invaded France. Set in 1942, this suspenseful novel – with widely spaced lines and relatively large print – will appeal to readers 10 years old and up.