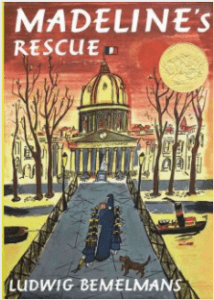 An Analysis by Gurtaj in Grade 6

Annotation: When a girl named Madeline slips into a river, her school teacher tries to get a hold of her before she falls; but Madeline is a bit out of reach. Everyone who has seen her fall in, tries to help but no one is successful. Suddenly, out of nowhere, a dog barges into the lake and reunites the girl with her teacher. The dog is taken back to where Madeline lives, where the two new friends live happily together.

“…she slipped and fell”.

“After she left there was a fight”.

“She was petted, she was fed”.

“But no one answered…”

“That kept its head”

“They came back home broken-hearted”

Connection: Text to Self

My connection with the book Madeline’s Rescue by the writer Ludwig Bemelmans relates to what happened to my dad. His friend fell off a bridge into a river. The two men were walking in an okay crowded area, but they wanted more space, so they started to walk over to a park. It was fine until they got to a bridge. The bridge didn’t have a railing. They walked carefully at first, but my dad’s friend decided to run. He tripped! My dad tried to get a hold of him, but it was too late. Everyone tried to help, but it didn’t matter. He had already fallen. Suddenly, everyone saw a stray dog run in and retrieve him. My dad’s friend was safe, after all.