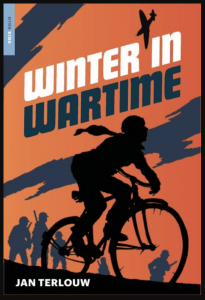 Terlouw, Jan. Winter in Wartime. New York: New York Review Books, 2020.
Fifteen-year-old Michiel has lived through four years of war. He spends his days running secret errands on his bicycle and avoiding the Allied bombers flying overhead and the Nazi soldiers occupying his town. When he learns that a wounded British pilot is hiding in the woods, he starts secretly bringing him food and supplies. When the villagers are blamed for the death of a German and his father is shot in revenge, he starts to distrust everyone. Who murdered that German soldier? Who is watching him? When will soldiers come for him?
This 220-page novel based on the author’s own childhood has been in print in the Netherlands for almost fifty years. Translated from the Dutch by Laura Watkinson, it is highly recommended for mature readers 11 to 17 years old who enjoy action-oriented, fast-paced stories.

More stories set in the Netherlands

More stories based on the author’s own life