Looking for stories full of hope?

Joan Bauer’s fictional characters all live in difficult circumstances. They often have to be stronger than their parents. They often end up moving households to escape abuse or go on road trips. They all cheerfully determine their own futures.

Find the important information is hidden in these sentences:

“Mrs. Mariah, my new English teacher, writes adjectives on the board. I’ve decided to collect adjectives, because they don’t cost anything and they don’t take up any room in my pack” (73).

“…back when we had our house, she’d buy vanilla ice cream, let it soften, put it in a bowl, and stir in some maple syrup and toasted pecans, then she’d freeze it again. We’d eat it in big yellow bowls on the porch. Those bowls got broken when the sheriff came and carried all our stuff to the street” (148).

“I put Reba’s box of thank-you cards on the desk and her pens in a Sweet Spot mug, ready for graciousness” (245).

Bauer, Joan. Best Foot Forward. New York : Putnam, 2005.
Jenna is busy running between school, Al-Anon meetings, and her job at a shoe store.  And life becomes more complicated when her boss, Mrs. Gladstone, hires another teenager: a boy on probation. Who can you trust in life? Can people really change? Readers in grades eight to ten will enjoy this humourous novel with a bit of romance and a lot of angst. [Stores; Old age; Shoplifting; Family problems; Work; Ethics] 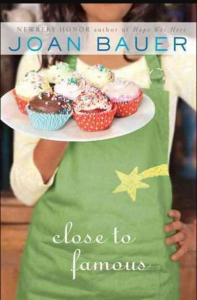 Bauer, Joan. Close to Famous. New York: Viking, 2011.
Twelve-year-old Foster and her mother run away from her mother’s abusive boyfriend who pretends to be Elvis. Late at night, the two of them get in their car and start driving, not stopping until they arrive in a small West Virginia town where Foster makes new friends and starts her own business: baking cupcakes.  A heart-warming and courageous novel for readers 11 years old and up.  [Baking; Courage; West Virginia; Single-parent families; Mothers and daughters; Perseverance (Ethics); Violence; Television; Moving (Household)]

Bauer, Joan.  Hope Was Here. Speak, 2000.
Hope reluctantly leaves New York City to move to a small town in Wisconsin when her aunt gets a job running the local diner. Hope is a waitress and used to thinking on her feet, but she faces a lot more surprises than she expected when the diner’s owner decides to run for election against a corrupt mayor. Recommended for readers 13 to 16 years old. [Wisconsin; Aunts; Friendship; Cancer; Moving (Household); Waiters and waitresses; Newbery medal books; Young adult fiction] 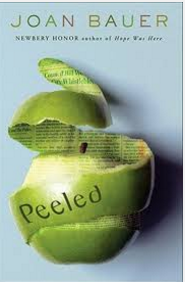 Bauer, Joan. Peeled. New York: G.P. Putnam’s Sons, 2008.
Sixteen-year-old Hildy enjoys being a reporter for her high school newspaper. But enjoyment turns to anxiety when she discovers there may be more than ghosts causing the strange stories about an old derelict house. What will she discover in her determination to find the truth? A suspenseful yet thoughtful novel, full of realistic details about apple farms, for readers in grade seven and up. [Reporters and reporting; Journalism; Schools; Farm life; Haunted houses; Perseverance (Ethics); Fear; Cousins; Fathers and daughters; New York (State)]

Bauer, Joan. Rules of the Road. New York: Putman’s, 1998.
Sixteen-year-old Jenna gets a job driving the elderly owner of a chain of successful shoe stores from Chicago to Texas to confront the son who is trying to force her to retire, and along the way Jenna hones her talents as a saleswoman and finds the strength to face her alcoholic father. – CIP [Alcoholism; Automobiles; Fathers and daughters; Old age; Stores, Retail; Texas; Voyages and travels]

Bauer, Joan. Squashed. New York: Speak, 2005, c1992.
Sixteen-year-old Ellie is determined to grow a gigantic, prize-winning pumpkin, to lose twenty pounds and to win the heart of the new boy in town. Meanwhile, her father wants her to “become a different person. It didn’t work. The trick was to repeat positive phrases about yourself until you believed them even if they were lies, which they usually were…” (57). [Competitions; Country life; Fathers and daughters; Friendship; Humorous stories; Iowa]