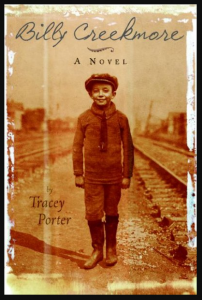 Porter, Tracey. Billy Creekmore. New York: Joanna Cotler Books, 2007.
Ten-year-old Billy suffers the cruelties of life in an orphanage. Not enough food. Not enough warmth. And no love, at all. Everything changes, though, when an uncle and aunt claim him and take him off to live with them in a coal mining town in West Virginia. Billy’s spunk and love of storytelling, though, cause trouble when he gets involved with the union. This is 1905 and the mine managers are angry. So Billy runs away to join the circus and find the father who long ago abandoned him.
This modern-day Charles Dickens novel could also be compared toThe Mostly True Adventures of Homer P. Figg by Rodman Philbrick. It is highly recommended for readers 9 to 14 years old. It would also make a wonderful read-aloud for a fifth grade class.  [Aunts and uncles; Circus; Coals and coal mining; Fathers and sons; Historical fiction; Honesty; Orphanages; Runaways; Self-reliance; West Virginia]