Sharon Creech was born in Ohio on July 29, 1945.
Learn more about her at http://www.sharoncreech.com/. 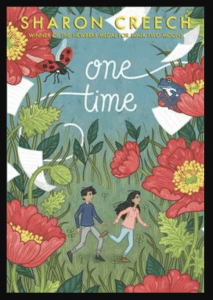 Creech, Sharon. One Time. New York: Joanna Cotler Books, an imprint of HarperCollinsPublishers, 2020.
Gina’s mind is always racing, observing the world around her and noticing details other people miss. But her colourful style and active imagination mean that other people often think she is odd. Until Antonio moves next door and Miss Lightstone becomes her new homeroom teacher
“Who are you?”
“What could you be?”
Those are the questions asked in this easy-to-read novel highly recommended for readers 10 to 13 years old. (Also recommended for teachers who enjoy being inspired by new ideas.) 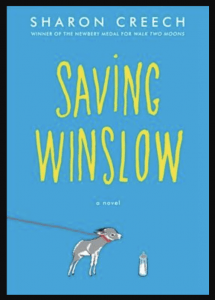 Creech, Sharon. Saving Winslow. New York: Joanna Cotler Books, an imprint of HarperCollinsPublishers, 2018.
Louie’s father often brings home small animals needing to be rescued. Most of the time, they don’t survive. Louie usually doesn’t have any better luck. The worms he brought home? Dead after two days. The lightning bugs? Dead after three days. But Louie is determined. When his father brings home a motherless mini donkey on a cold January morning, Louie decides that this time he will succeed: Winslow will live. Beautifully written and heart-warming, this 165-page novel is most highly recommended for animal lovers 8 to 12 years old.

P.S. Of course, all Sharon Creech stories are amazing works of art. But this one is outstanding in its introduction to themes to encourage conversation between children and adults. How can you love someone if you know they might disappear? How do you regain hope after loss? How can you joyfully help someone fulfill their purpose in life even though it means they will leave you? 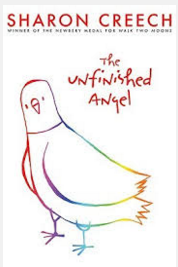 The Unfinished Angel by Sharon Creech (Joanna Cotler Books, 2009) is a heart-felt novel about a confused angel who is assigned to watch over the people in a small town in Switzerland. When new people come from America, a small girl – Zola – sees the angel and starts to control her. This poor angel starts to feel that she is an unfinished angel who is lost and an awful guardian. Will she realize she is a real angel before it’s too late? You’ll have to read the story to find out. But I can tell you this was an amazing story that I recommend to anyone looking for a soul healing novel. (Andriana in grade eight)

Creech, Sharon. The Unfinished Angel. HarperCollins, 2009.
Life triumphs over grief in all of Creech’s novels. Mysteries abound. And this new novel is no exception. In the Swiss Alps, Zola moves with her father into an old stone house and meets an angel who narrates the story: “What is my mission? I think I should have been told. I have been looking around in the stone tower of Casa Rosa, waiting to find out” (p. 2). This angel is as confused about life as anyone: “Maybe you think I should just fly up to heaven and ask some questions, but it is not that easy. I do not know where heaven is nor where the angel training center is nor where any other angels are. And yes, I have looked” (p. 19). But when Zola decides to help some homeless orphans, everyone in the village starts to find new purpose and happiness.  Humorous and lively, this hopeful and easy-to-read story is sure to be enjoyed by imaginative readers of all ages. (Ms. Rosen) 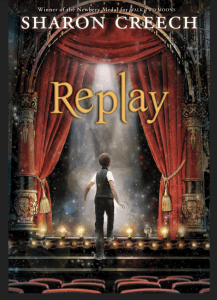 Replay by Sharon Creech (Joanne Cottler, 2005) is an excellent novel about a young Italian boy growing up in a large family in which he feels almost invisible because he has three siblings with busy schedules. Contento, the oldest and only girl, is an amazing soccer player. Pietro, the oldest boy, is all about football. The youngest, Nunzio, enjoys singing and has a wonderful voice. Then there is Leo, right in the middle. Leo is an actor, so when he doesn’t get the main role in a school play and finds out he is playing the part of an old woman instead, he is upset. While rummaging through his attic, he stumbles upon an old, dusty journal about his father’s past. After reading it, he discovers many interesting things that he had not known. By the end of the book, Leo realizes that there are many important things in life, and one of the of the most important things is being part of a family. (Yamine in grade eight) 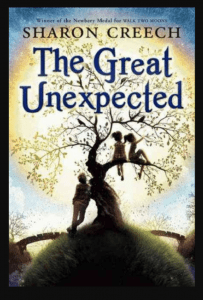 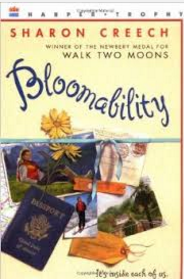 This “is a story full of suspense. Dinnie – also known as Dominica Santolina Doone – and her family have followed their father around the United States from Kentucky to North Carolina, Tennessee, Ohio, Indiana, Wisconsin, Oklahoma, Arkansas, Oregon, Texas, California, and New Mexico. Finally, Dinnie is sent to live with her Aunt and Uncle in Switzerland who are complete strangers, and when she goes to school there, she meets some pretty crazy people. Back home, life isn’t going so well for her siblings: Dinnie’s older sister is pregnant and her brother Crick is sent to jail. When Dinnie eventually makes friends in Switzerland, her life is thrown into turmoil again when her best friends, Guthrie and Lila, are trapped by an avalanche while on the school’s annual skiing trip, and Dinnie sees it all happen. Will Guthrie and Lila be okay? Will Dinnie finally find a sense of belonging? You’ll have to read to find out.” – Jezerah in grade 7