Looking for a story set in Ireland? 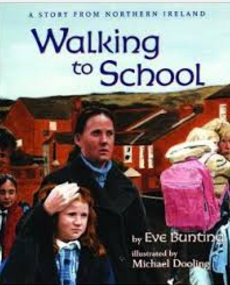 “When the path to eight-year-old Allison’s Catholic school goes through hostile Protestant territory in Belfast, Northern Ireland, Allison finds she is not alone in her loathing of the situation.” – CIP. An emotional and informative picture book, by an award-winning writer, for readers 8-years-old and up. [Belfast; Northern Ireland; Prejudices]

Cowley, Joy. The Wishing of Biddy Malone. New York: Puffin Books, 2006, c2004.
In Ireland, a young girl who cannot sing, dance, or control her temper stumbles across a faerie village, where a beautiful boy asks her to name her three wishes–but does not promise to grant them for her. – CIP [Fairies; Ireland; Magic; Wishes]

Dowd, Siobhan. Bog Child. New Milford, Conn.: Roaring Brook Press, 2007, c2006.
“In 1981, the height of Ireland‘s “Troubles,” eighteen-year-old Fergus is distracted from his upcoming A-level exams by his imprisoned brother’s hunger strike, the stress of being a courier for Sinn Fein, and dreams of a murdered girl whose body he discovered in a bog.” – CIP. A haunting novel for mature and competent readers 12-years-old and up. [Family life; Ireland; Political prisoners; Terrorism; Young adult fiction]

Dowd, Siobhan. A Swift Pure Cry. New Milford, Conn.: Roaring Brook Press, 2007, c2006.
OCoolbar, Ireland, is a village of secrets and Shell, caretaker to her younger brother and sister after the death of their mother and with the absence of their father, is not about to reveal hers until suspicion falls on the wrong person. – CIP [Brothers and sisters; Ireland; Family problems; Fathers and daughters; Grief; Priests; Young adult fiction]

Doyle, Malachy. Who is Jesse Flood? New York: Bloomsbury, 2004, c2002.
Striving to cope with the arguments of his parents and his feelings of not belonging, fourteen-year-old Jesse Flood struggles to find his place in a small town in Northern Ireland. – CIP [Northern Ireland; Family problems; Young adult fiction]

Giff, Patricia Reilly. Maggie’s Door. New York: Yearling, 2005, c2003.
Nory and Sean, both set out on their own from Ireland, hoping to reach a better life in America during the 1800s. [Emigration; Famines; Historical fiction; Ireland; Poverty]

Heneghan, James. Safe House. Victoria, B.C. : Orca Book Publishers, 2006.
Twelve-year-old Liam runs for his life after watching intruders kill his parents.  The police hide him in a safe house, but a betrayal means he is on the run again. This easy-to-read novel for readers eleven years old and up vividly portrays the conflict between Protestants and Catholics in Belfast, Northern Ireland. [Northern Ireland; Violence; Murder; Orphans; Suspense]

Napoli, Donna Jo. Hush: An Irish Princess’ Tale. New York: Atheneum Books for Young Readers, 2007.
Fifteen-year-old Melkorka, an Irish princess, is kidnapped by Russian slave traders and not only learns how to survive but to challenge some of the brutality of her captors, who are fascinated by her apparent muteness and the possibility that she is enchanted. – CIP [Historical fiction; Ireland; Middle Ages; Princesses; Selective mutism; Slavery]

Parkinson, Siobhan. Blue Like Friday. New Milford, Conn. : Roaring Brook Press, 2008.
Every friendship is unique, but Hal and Olivia’s is especially unique because Hal sees the world differently: he has synesthesia and even days of the week have colours for him. But the problem in the novel is Hal’s mother’s boyfriend. Despite Hal and Olivia’s plotting, the boyfriend doesn’t disappear. Instead, Hal’s mother disappears. This quietly humorous novel from Ireland is perfect for middle school readers who enjoyed Criss Cross by Perkins or Stargirl by Spinelli. [Ireland; Synesthesia; Friendship; Family life] 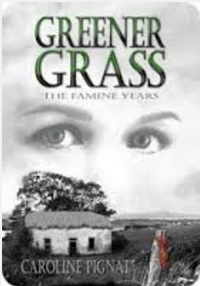 “Kit Byrne’s family unity is tested in nineteenth-century rural Ireland when the potato famine hits and wealthy landowner Lord Fraser drives them from their home, launching a series of tragedies that separates Kit from her family as they try to escape to a better life.” – CIP. The first in a series recommended for avid readers 12-years-old and up. [Historical fiction; Ireland; Poverty]