Looking for a novel to use with grades 4 or 5?
Consider one of these!

Appelt, Kathi. The Underneath. New York : Atheneum Books for Young Readers, 2010, c2008.
An old dog and two kittens survive under the house of a hateful owner in this 2009 Newbery Honor Book. AR reading level of 5.2. Due to its length, recommended as a group novel for grade 4 and a class novel for grade 5. [Loneliness; Friendship; Survival; Texas; Fantasy fiction; Revenge; Cats; Dogs] 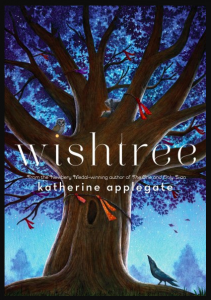 Applegate, Katherine. Wishtree. New York: Feiwel and Friends, 2017.
Red is an oak tree who has seen a lot of changes. Provided a home for countless little creatures. And comforted many children. But now someone wants to get rid of Red. What will happen to this venerable neighbourhood tree?
A wonderful read-aloud novel or class novel for children 7 to 9 years old. A wonderful story for imaginative readers who enjoy seeing life from a wider perspective. [Friendship; History; Prejudice; Racism; Trees]

Armstrong, Alan. Whittington.  New York : Random House, 2005.
This novel tells three stories at once: Ben can’t who read and hates school; Whittington the cat who comes to live in a barn with horses, chickens, and a duck called Lady; and Dick Whittington who once lived in England and made his fortune with the help of a cat without a name. How do you keep up your courage when everything seems to be against you? How can stories save you life? Read this novel and find out!  A Newbery Honor Book with an AR reading level of 4.9, recommended for grades 4 to 5.  [Country life; Cats; Dyslexia; Farms; Historical fiction; England; Courage; Perseverance; Friendship; Storytelling]

Baker, Deidre. Becca at Sea. Toronto : Groundwood Books, 2007.
Becca is surprised by an eccentric aunt, bossy cousins and all sorts of adventures when she is sent to live with her grandmother on an island off the coast of B.C. This story could be compared to Arthur, for the Very First Time by Patricia MacLachlan. AR level of 4.4. Recommended as a small group novel for grades 4 to 5.  [Aunts; British Columbia; Eccentrics and eccentricities; Family life; Grandmothers; Islands; Sea life; Self-perception]

Bresdorff, Bodil. The Crow-girl. New York : Farrar Straus Giroux, 2006, c2004.
Translated from Danish. A girl lives by the sea. When her grandmother dies, she sets out alone on a journey, meeting new people and creating a new family. On ERAC recommended list for grades 4 to 5.  [Denmark; Orphans; Survival; Courage; Family life]

Corder, Zizou. Lionboy. London : Puffin Books, 2003.
In the near future, a boy with the ability to speak the language of cats sets out from London to seek his kidnapped parents and finds himself on a Paris-bound circus ship learning to train lions. – CIP  AR level: 5.7.  Recommended as a small group novel for grades 4 to 5. [Adventure and adventurers; Cats; Circus; England; France; Human-animal communication; Kidnapping; Lions]

Cowley, Joy. Chicken Feathers. New York : Philomel Books, 2008.
What if your pet could talk to you? What if it could help you solve mysteries? Josh’s chicken, Semolina, helps him solve the mystery of the disappearing eggs in this humorous, easy-to-read novel about a family who lives on a farm. If you want to combine the adventures of a picture book by Bill Peet, the hopefulness of a novel by Patricia MacLachlan and the flowing language of Charlotte’s Web by E.B. White, be sure to read this story from New Zealand. AR level: 4.1. Recommended for grades 3 to 4. [Chickens; Family life; Farm life; Pets; Summer]

Creech, Sharon. Love that Dog. New York, NY : HarperCollins Children’s Books, 2001.
A young student, who comes to love poetry through a personal understanding of what different famous poems mean to him, surprises himself by writing his own inspired poem. – CIP On ERAC recommended novel list for grades 5 to 6. [Dogs; Imagination; Poetry; Schools]

Cumyn, Allen. The Secret Life of Owen Skye. Toronto : Douglas & McIntyre, 2002.
Owen and his brother enjoy adventures in this Canadian novel that could be compared to The Moffats by Eleanor Estes. AR level: 5.5. Recommended as a small group novel for grades 4 to 5.  [Adventure and adventurers; Brothers; Family life; Imagination; Love; Valentine’s Day]

Doder, Joshua. Grk Smells a Rat. London : Andersen, 2008.
Tim and his dog Grk are off to watch Max play in a tennis tournament in Delhi, India. But when they discover enslaved children working in hidden factories, they have to help even if it places their lives in danger.  AR level: 4.7. Action, suspense and humour are all combined in this novel recommended for grades 4 to 5. [Adventure and adventurers; Child slaves; Courage; Dogs; Humorous stories; Gangs; India; Mystery and detective stories; Tennis]

Horvath, Polly. Everything On a Waffle. Toronto: Douglas & McIntyre, 2001.
Eleven-year-old Primrose living in a small fishing village in British Columbia recounts her experiences and all that she learns about human nature and the unpredictability of life in the months after her parents are lost at sea. AR level: 5.8. A Newbery Honor book in 2002, on ERAC recommended list for grades 5 to 7.  [British Columbia; Survival; Orphans; Sea stories; Self-reliance; Newbery Medal]

Ibbotson, Eva. Journey to the River Sea. New York: Macmillan Children’s Books, 2001.
Maia is sent with her governess, in 1910, to live with a family in Brazil where she finds a way to survive despite mistreatment and a way to explore the mysterious Amazon River.  AR level: 5.6. Recommended as a small group novel for grade 5.  [Adventure and adventurers; Amazon River; Brazil; Friendship; Historical fiction; Orphans]

Korman, Gordon. The Sixth Grade Nickname Game. New York : Hyperion Books for Children, 1998.
Eleven-year-old best friends Jeff and Wiley, who like to give nicknames to their classmates, try to find the right one for the new girl Cassandra, while adjusting to the football coach who has become their new teacher. – CIP  AR level: 4.3. A Canadian novel on ERAC recommended novel list for grades 4 to 6. [Humorous stories; Nicknames; Schools]

Lawson, Robert. Rabbit Hill. New York : Viking Press, 1944.
All the animals are excited about the new people moving into the house on the hill. But how will that change life for them on the farm? AR level: 6.4. This joyful story, the 1945 Newbery Medal winner, is recommended for grades 4 to 5.  [Animals; Country life; Friendship; Moving (Household); Newbery Medal]

Lewis, C.S. The Lion, the Witch and the Wardrobe. New York : HarperTrophy, 1994, c1950.
Four English schoolchildren find their way through the back of a wardrobe into the magic land of Narnia and assist Aslan, the golden lion, to triumph over the White Witch, who has cursed the land with eternal winter.  – CIP  This classic, with an AR level of 5.7, is on the ERAC recommended novel list for grades 4-5. [England; Fantasy fiction]

MacLachlan, Patricia. Arthur, for the Very First Time.
Ten-year-old Arthur does not want to spend the summer with his great-aunt and great-uncle. He does not like living on their farm. He wants to go home.  But slowly, as he makes friends with a girl who encourages him to relax and have some fun, he discovers that life is full of unexpected and joyful adventures. AR level: 4.2. Recommended for grades 4 to 5.  [Aunts; Uncles; Country life; Friendship; Summer; Family life; Eccentrics and Eccentricities; Individuality]

MacLachlan, Patricia. Sarah, Plain and Tall. New York : HarperTrophy, 2004, c1985.
When their father invites a mail-order bride to come live with them in their prairie home, Caleb and Anna are captivated by their new mother and hope that she will stay. – CIP  AR level: 3.4. The 1986 Newbery winner. Recommended as class novel for grade 4 or a small group novel for grade 5. [Historical fiction; Country life; Grief; Stepmothers; Newbery Medal; Frontier and pioneer life]

Morpurgo, Michael. An Elephant in the Garden. New York : Feiwel and Friends, 2011, c2010.
In 1944, Elizabeth’s mother works at Dresden Zoo, where her favorite animal is the elephant, Marlene. When the animals must be killed to prevent them running amok when the town is bombed, Elizabeth’s mother moves Marlene into the back garden.- CIP  AR level: 5.2.  Recommended as a small group novel for grade 5.  [WW 2; Elephants; Germany; Zoos; Historical fiction]

Patron, Susan. The Higher Power of Lucky. New York : Atheneum Books for Young Readers, 2006.
[This novel] is about a young girl, Lucky, who is adventurous and loves to explore. She especially loves examining the insects around her trailer which is set in a circle of trailers in a small town with a tiny museum. Lucky is very caring and very sociable. It is easy for her to make friends, which is fortunate because Lucky’s mother tragically died two years before the story starts and her father has disappeared. Now she’s living with her father’s former girlfriend who comes from France and had only planned to take care of Lucky until she could find her a wonderful foster family. But Bridget is finding that Lucky is growing on her. What happens? Well, you now have to read this amazing novel and go on your own adventure, like I did…. (Londyn in grade 7)  AR level: 5.9. A heart-warming humorous novel, the Newbery Medal winner in 2007, recommended for grades 4 to 5. [Abandoned children; California; Family life; Interpersonal relationships; Newbery Medal; Runaways]

Pearson, Kit. The Whole Truth. Toronto : HarperCollins, 2011.
Nine-year-old Polly and her older sister Maud travel from Winnipeg to a small island off the coast of British Columbia to live with their grandmother. Their mother has died, but will they ever see their father again? Set in 1932, this story will be enjoyed by girls nine to thirteen years old.  Recommended as a small group novel for grades 5 to 7. (Historical fiction; Moving, Household; Sisters; Boarding schools; Grandmothers; Secrets; Poverty; Family life; Islands; Mystery and detective stories)

Pennypacker, Sara. Clementine, Friend of the Week. Disney • Hyperion, 2010.
Reading Clementine stories will surely bring smiles to the faces of readers who have enjoyed Russell Hoban’s Frances and Beverly Cleary’s Ramona. In this episode, Clementine comes up with all sorts of ways to get her classmates to write wonderful comments about her, discovers her friend Margaret isn’t as confident as she appears, and loses her kitten called Moisturizer. She learns that everyone feels hurt sometimes, and that hurt feelings are part of being human.  A great read-aloud for students in grades two and three, this novel is sure to appeal to anyone with a fondness for funny stories about rambunctious children. AR level: 4.2.  Recommended as a small group novel for grade 4. [Cats; Massachusetts; Family life; Friendship; Humorous stories; Schools]

Spinelli, Jerry. Loser. New York : Joanna Cotler Books, 2002.
Even though his classmates from first grade on have considered him strange and a loser, Daniel Zinkoff’s optimism and exuberance and the support of his loving family do not allow him to feel that way about himself. – CIP   AR level: 4.3.   On ERAC recommended list for grades 4 to 6. [Schools; Family life; Self-acceptance]

Thor, Annika. A Faraway Island. Delacorte Press, 2009.
Twelve-year-old Stephie and eight-year-old Nellie are sent away from their parents in Austria to live with strangers in Sweden in 1939 . Nellie lives with a happy loving family, but Stephie does not. Nellie has fun at school, but Stephie does not. Stephie wants her parents to come, but they do not. Based on the experiences of children sent to safety in Sweden during the war, this novel will appeal to readers 11 to 14 years old. Translated from Swedish. AR level: 4.4. Recommended as a small group novel for grade 5. [Sweden; WW 2; Jews; Immigration; Foster children; Loneliness; Bullies; Sisters; Historical fiction; Courage; Refugees]

Winthrop, Elizabeth. The Castle in the Attic. New York Bantam Doubleday 1985, 1994.
A gift of a toy castle, complete with silver knight, introduces William to an adventure involving magic and a personal quest. – CIP  AR level: 4.9.  On ERAC recommended list for grades 4 to 5. [Magic; Castles; Fantasy fiction; Knights and knighthood]