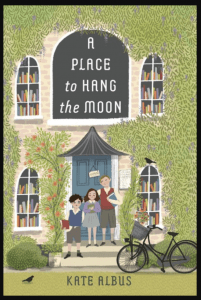 You may have read other stories about British WW 2 evacuees: Good Night, Mr. Tom by Michelle Magorian; The Sky is Falling by Kit Pearson; and The War that Saved My Life by Kimberly Brubaker Baker. You may have read other stories about orphans: Anne of Green Gables  by L.M. Montgomery; the Harry Potter series by J.K. Rowling; Pine Island Home by Polly Horvath. The list of stories could go on and on and on. So why read this new novel by Kate Albus?

A Place to Hang the Moon is as heartwarming as stories by Beverly Cleary and Eleanor Estes.  It is as unflinching in its description of hardships as novels by Avi and Karen Hesse. Kate Albus’s three protagonists display all the determination and resilience found in the best of children’s stories. Recommended for readers 9 to 12 years old.

Bloor, Edward. Story Time.  New York: Harcourt, 2004.
George and Kate are selected to attend a special school that is proud of itself for having the highest test scores in the country. But what is lost when daily testing and constant pressure replace joyful learning? Mystery, suspense, and humour all combine in this engaging novel suitable for readers 12 years old and up.

Bow, Erin. Plain Kate. New York : Arthur A. Levine Books, 2010.
“Plain Kate’s odd appearance and expertise as a woodcarver cause some to think her a witch, but friendship with a talking cat and, later, with humans help her to survive and even thrive in a world of magic, charms, and fear.” – CIP  This endearing novel is recommended for readers ten to fourteen years old. It could be compared to The Midwife’s Apprentice by Karen Cushman. [Cats; Fantasy fiction; Homelessness; Magic; Orphans; Runaways; Woodcarving]

Horvath. Polly. Everything on a Waffle.

Other stories about orphans:

Other stories about survival: