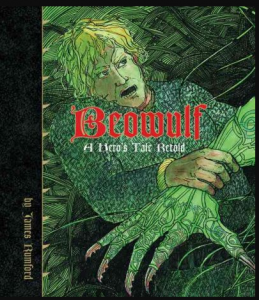 Before we begin, watch this short clip about the Anglo-Saxons: HERE

(Clicking on the links on this page will take you away from Ms. Rosen Reads. Ms. Rosen is not responsible for the content on other sites.) 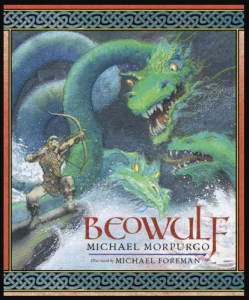 Participation: silently view the most famous story from Anglo-Saxon times.

Knowledge: know the basic plot and style of writing of Beowulf.

Attitude: show an in interest in how stories portray great themes of humanity.

Skills: be able to listen to a long story 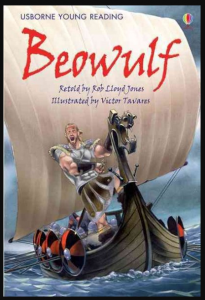 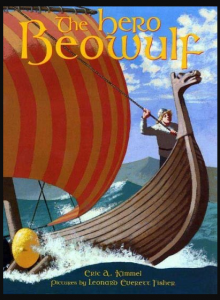 What did you especially notice in this story?

Evaluation: accurate in answers, spelling and punctuation; neat and attractive.

Observations from students who have watched this story:

– there was always someone who doubted the hero

– the king was kind and gave his people nice things

– even though Grendel’s mother was a monster, she still grieved over her son

– the necklace was passed on from person to person

– in many stories of dragons, all the dragons crave gold

– the dead people floated down the river – when battling, the fire didn’t hit the gold

– Beowulf didn’t take his sword into battle with Grendel

– the land of the Danish is now called Denmark

– the colour of the blood varied: red versus black: mother versus Grendel

– Beowulf was trying to defeat Grendel’s mother, he took a sword

– when Beowulf was fighting the dragon, he was hallucinating that the dragon was himself

– when the fisherman came, he was the first one to deny that the monster was a demon but he slowly gained respect for Beowulf

– there could be allusions to Christian stories such as the Passover

– when the man was drunk, Beowulf offered him more ale

– when Beowulf fought Grendel, he tore off his arm and hung it

– the monsters formed from Beowulf’s shadows

– Beowulf hung up the monsters and then they disappeared

– you shouldn’t ignore your problems; face them if you want happiness

– Grendel’s mother took his body and kept it with her…

– Grendel and his mother could possibly not exist

– The point of stories is to help us deal with our own psychological battles in life.

– only one soldier helped Beowulf

– the dragon was voracious: it wanted all the gold

– mother was full of love for her son = red

– every time when one of the monster died, it turned into dust and disappeared

– a necklace kept being passed along

– the monsters only came where there were feasts

– when Beowulf died, he wasn’t sad; he honoured death

– he would rather die in battle than live in shame

– he was quite humble

– when he dove into the hole, he had to hold his breath for a day and later he climbed out: a myth

– Titanic and Journey to the Centre of the Earth are similar: diving into the depths

– everyone who ate with the king had long hair

– when the mother knocked him down, there was a sword… fantastical world of myth

– the story is similar to Percy Jackson: he had to go into an underworld to get a pearl

– there weren’t many women

– at the end, all of the soldiers except one were cowards and ran

– they never trusted the peasant when he was scared

– only one person helped; the others ran

– at the first, there was a man who called Beowulf a traitor

– Beowulf wasn’t burned by the dragon three times until the very end, the fourth time

– Beowulf cut of the mother’s hands and she grew back

– Beowulf passes on the crown the brave soldier

– Grendel comes when there is happiness and joy among the people

– when the one man stayed to help, in the Bible only one man thanks Jesus and the rest leave

– after Beowulf dies, people build a mountain of rocks, a monument

– the setting was dark when there was a monster

– at the beginning, he didn’t want to use weapons

– on the sacred necklace, there were three medallions

– the hands and heads disappeared after being killed

– the thief fled from the banquet, stole from the dragon, the dragon awoke and came to destroy: greed