Looking for a story about foster families?
Try these! 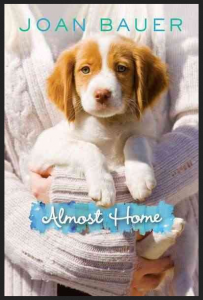 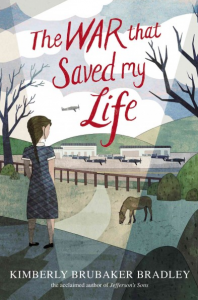 “A young disabled girl and her brother are evacuated from London to the English countryside during World War II, where they find life to be much sweeter away from their abusive mother.” – CIP. Highly recommended for readers 11 years old and up. [Abuse; Brothers and sisters; England; Foster children; People with Disabilities; Runaways] 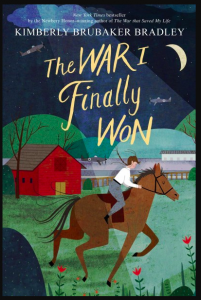 Bradley, Kimberly Brubaker. The War I Finally Won. New York: Dial Books for Young Readers 2017.
Do you need courage to have hope? Can you know something but not believe it? How do you learn to overcome fear? The story of Ada and Jamie, evacuated from London in The War That Saved My Life, continues in this 385-page novel recommended for readers 12 years old and up.
The story begins with surgery to repair Ada’s clubfoot. But surgery can’t repair the sense of rejection she still feels from years of abuse. And surgery can’t teach her how to trust anyone except herself. It is steadfast love from her new guardian and her own determination to learn that transforms Ada from a fearful 11-year-old to a confident 14-year-old ready to embrace the goodness of life. P.S. Part of the brilliance of this novel is its quiet complexity. While told from the limited point of view of Ada, the reader sees that we all have limited points of view. And sometimes our lack of knowledge limits our ability to see clearly. Lady Thorton is stand-offish due to limitations imposed by her childhood. People in the village mistrust Ruth – a Jewish refugee – due to ignorance of events in Germany. Susan assumes she will be rejected by a friend’s family, and Maggie thinks her mother doesn’t care about her. Over and over again, we see that life may have been terrible in the past but it can still be good in the future. And we are all lovable. A multiple award-winner and New York Times bestseller. [England; Evacuees; Historical fiction; World War 2]

Creech, Sharon. The Boy on the Porch. New York, NY : Joanna Cotler Books, 2013.
” One day a young couple wakes to find a boy asleep on their porch. Unable to speak, the boy cannot explain his history. What kind of people would leave their child with strangers? All John and Marta know is that they have been chosen to care for this boy. As their connection to him grows, they embrace his exuberant spirit and talents. The three of them blossom into an unlikely family, but how long can their happiness last?” – flyleaf.  A joyous story highly recommended for imaginative readers eight to twelve-years-old, especially ones who have enjoyed Sarah, Plain and Tall by Sarah MacLachlan.  [Family life; Foster children; Missing children; Mutism; Poverty]

Creech, Sharon. The Great Unexpected. New York: Joanne Cotler Books, 2012.
Naomi and Lizzie, orphans and best friends, discover a strange boy and a travelling man in this eccentric story set in the small town of Blackbird Tree. A charming, heart-warming story with all the eccentricity of Polly Horvath stories but with a touch of magic.  Highly recommended for readers nine to twelve-years-old. [Ireland; Foster children; Orphans; Poverty; Inheritances; Forgiveness; Friendship; Humorous stories; Magic]

Where I’d Like To Be by Frances O’Roark Dowell (Atheneum, 2004) is about a twelve-year-old foster girl named Maddie who collects pictures of houses and craves a place to call home. One day, a new girl arrives – Murphy is her name – and makes friends at school. They all – Murphy, Ricky Ray, Dontia, Logan and Maddie –   put their minds into a job they want to accomplish and succeed in building a fort which they think of as their new home. Finally, Maddie starts to feel like maybe she really does have a home! (Brooke in grade eight) 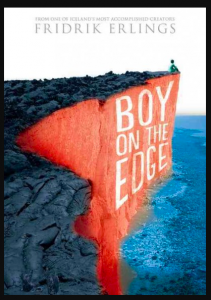 Erlings, Fridrick. Boy on the Edge. Somerville, Mass.: Candlewick Press, 2014, c2012.
Henry stutters. He can’t read and he doesn’t walk properly. He has no friends and his mother can’t manage his anger. So he’s sent to a farm for homeless boys, run by an angry morose minister.  How can any goodness come out of this situation? This 219-page novel of the search for escape and the discovery of quiet peace is recommended for thoughtful readers 13 years old and up. [Anger; Brothers; Child abuse; Faith; Farm life; Foster children; Iceland]

Giff, Patricia Reilly. Pictures of Hollis Woods. New York : Dell Yearling, 2004, c2002.
Twelve-year-old Hollis has always longed for a family. After years of moving from home to home, she is finally taken in a by Josie, a retired art teacher in Long Island, New York. But her sense of security is threatened when she has to become caregiver to the increasingly forgetful Josie.  A Newbery Honor Book.

Heneghan, James. Bank Job.
Thinking they are being helpful, thirteen-year-old Nell and her friends rob banks in Vancouver, B.C. to help her foster parents pay for needed house renovations. 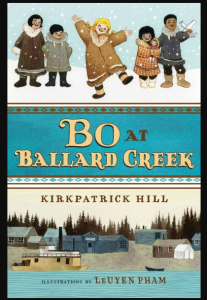 Hill, Kirkpatrick. Bo at Ballard Creek. New York: Henry Holt and Company, 2013.
What a cheerful story! Set in Alaska in the late 1920s, this inspiring novel of a much-loved little girl will appeal to fans of ‘Little House on the Prairie’ and ‘Sarah, Plain and Tall’ and ‘Anne of Green Gables’. Bo – abandoned by her mother, a good-time girl who is leaving town – is taken in by Jack and Arvid, two unmarried gold miners who can’t bear to see her sent to an orphanage. So now she has two papas. No mama, but as Jack tells her, “sometimes mamas don’t stick around, you know. Just walk off. Lot of animals like that” (2). But he adds, “…lucky for us, someone giving away babies. Just what me and Arvid needed” (2).  And just what all the other villagers in Ballard enjoy: a little girl who sees life as an adventure. She learns both Eskimo and English. She encounters a bear. She joins in the festivities when an airplane arrives, and lovingly welcomes a little motherless boy whose father has died.  This novel by an accomplished Alaskan author – and former teacher – is highly recommended for readers – and listeners – 7 years old and up.

Hobbs, Will. The Maze.
After spending years in foster homes, fourteen-year-old Rick runs away from a youth detention centre, fearing for his life, and finds himself in a remote part of Utah where he helps a biologist reintroduce condors into the wild.

Horowitz, Anthony. Raven’s Gate.
Fourteen-year-old Matt is sent to a foster home in a Yorkshire village where he discover a plot involving an ancient curse.

Twelve-year-old Carley is astonished at the kindness she discovers when she is placed in a foster home with three young boys. She is used to a tough life with her mother in Las Vegas and suspicious of this family that treats her with generosity and consideration. Just when she is becoming comfortable, though, her mother decides she wants her back.  What will happen?  Recommended for readers in grades 5 to 8, this novel could be compared to Close to Famous by Joan Bauer.  [Connecticut; Family life; Foster children; Mothers and daughters; Stepfathers; Trust]

Ibbotson, Eva. Star of Kazan.
Annika, a servant in a Viennese household, discovers the truth about her mother and finds herself on an adventure filled with suspense, danger and possibilities. (Mothers and daughters; Austria; Horses; Foster children; Frienship)

Little, Jean. Dancing Through the Snow.
Ten-year-old Min has been in foster care since she was three years old. Now it is almost Christmas and she is in another new home.  Determined to keep out anyone’s love, her heart softens when she rescues a young dog.

Paterson, Katherine. The Great Gilly Hopkins.
Eleven-year-old Gilly does not trust anyone in her new foster home and she lets everyone know it. She has spent too much time in too many homes and she isn’t about to relax her guard now.  But slowly, she starts to change her mind. A Newbery Honor Book.

Pearson, Kit. The Sky is Falling.
Ten-year-old Norah and five-year-old Gavin are sent to a foster family in Canada in order to keep them safe from the fighting that is threatening England during the Second World War.

Pennypacker, Sara. The Summer of the Gypsy Moths. New York: Balzer + Bray, 2012.
A foster child named Angel and twelve-year-old Stella, who are living with Stella’s great-aunt Lousie at a cottage colony on Cape Cod, secretly assume responsibility for the vacation rentals when Lousie unexpectedly dies and the girls are afraid of being returned to the foster care system. [Secrets; Determination; Death; Massachusetts; Aunts; Courage; Humorous stories] 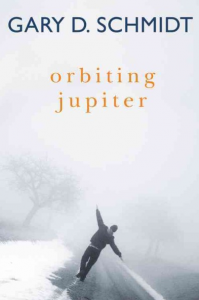 “Jack, 12, tells the gripping story of Joseph, 14, who joins his family as a foster child. Damaged in prison, Joseph wants nothing more than to find his baby daughter,Jupiter, whom he has never seen. When Joseph has begun to believe he’ll have a future, he is confronted by demons from his past that force a tragic sacrifice” FVRL.  This acclaimed author’s novel, perhaps his most lyrical, is reminiscent of some of Patricia MacLachlan’s novels: emotionally powerful with short sentences and long conversations.  It is highly recommended for readers 12-years-old and up. [Child abuse; Friendship; Foster children; Runaways; Teenage fathers; Winter]

Shaw. Liane. Fostergirls. Toronto: Second Story Press, 2011.
Sixteen-year-old Sadie has been shuffled from foster home to foster home. Now she is in a group home in a small town far from the city. She hates school and she hates life.  But then she makes a new friend and finds a loving family.  Written from the first-person point of view in present tense, this novel is a disappointment.  It never feels real.  But it may appeal to teenagers who are good at reading and like drama. [Canada; Foster children; Friendship; Juvenile delinquents; Young adult fiction]

Thor, Annika. A Faraway Island. Delacorte Press, 2009.
Twelve-year-old Stephie and eight-year-old Nellie are sent away from their parents in Austria to live with strangers in Sweden in 1939 . Nellie lives with a happy loving family, but Stephie does not. Nellie has fun at school, but Stephie does not. Stephie wants her parents to come, but they do not. Based on the experiences of children sent to safety in Sweden during the war, this novel will appeal to readers 11 to 14 years old. [Sweden; WW 2; Jews; Immigration; Foster children; Loneliness; Bullies; Sisters; Historical fiction; Courage; Refugees]

In this sequel to ‘A Faraway Island’, thirteen-year-old Stephie moves to the city to live with a foster family so she can go to high school. [Sweden; W W 2; Jews; Foster children; Love; Historical fiction; Schools; Refugees; Friendship] 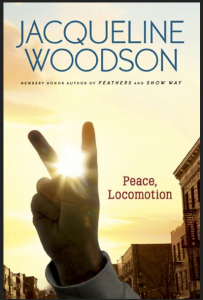 Woodson, Jacqueline. Peace, Locomotion. New York: G.P. Putnam’s Sons, 2009.
“Through letters to his little sister, who is living in a different foster home, sixth-grader Lonnie, also known as “Locomotion” keeps a record of their lives while they are apart, describing his own foster family, including his foster brother who returns home after losing a leg in the Iraq War.” – CIP.  Highly recommended for readers 11 to 16 years old. [African Americans; Brothers and sisters; Foster children; Letters; Orphans; Peace; War]