Literature Reflection by Gurvir in Grade 6

From reading fiction and nonfiction stories, I have learned that people in countries around the world have faced many hardships in life and still stayed on the Bridge of Character. From reading Me, Frida, and the Secret of the Peacock Ring, I learned about an Mexican artist, Frida Kahlo, who lost a ring that was found by two children and returned to her even though their father wanted to keep it; I learned that it is better to be poor than be dishonest. From reading The Last Pass, I learned about Bill Russell, an American basketball player, who despite being judged by the colour of his skin still reached his final goal of becoming a professional basketball player; I learned to persist even if I should ever face discrimination. From reading Wangari’s Trees of Peace, I learned about a African-born woman, Wangari Maathai, who planted over 30,000,000 trees even though the government was against her; I learned to work hard to protect this planet even if thousands of people are against me. From reading Mud City, I learned about the Taliban and the trouble they created in Afghanistan in the 1990s when many people were killed or arrested and women were not permitted to leave their houses unless if they wore burkas, causing a girl to dress up as a boy in order to earn money for her family’s food; I learned that sometimes people have to break the law and risk their lives to do what is right. Most importantly, I learned from reading Breaking Stalin’s Nose that in the 1940s, Russians lived in fear of their leader, Joseph Stalin, who would arrest them if they said even the slightest negative comment about him; I learned that sometimes people have to lie to do the right thing to protect someone. From reading all these stories, I realized that staying on the Bridge of Character is hard, but it is still important.

READ AROUND THE WORLD: A Reflection by Gurnoor in Grade 6

From books, I have learned about real life. The Human Body taught me much about myself! I learned that if you are very sick for more than a week and not feeling any better, it is a wise choice to go to the doctor and get a check up. Two books about Canada, Nunavut and Yukon informed me about two of our territories. I discovered that in Nunavut, the traditional flower is the purple saxifrage, and in the Yukon, the official bird is the raven. A book about a famous Canadian, Roberta Bondar, showed me that determination can lead to outstanding results. I learned that Roberta Bondar went into space in 1992 for the first time, and the she studied neurology: disorders of the nervous system, the eyes and inner ear. Finally, Malala and Iqbal taught me about courage. I read that Malala and Iqbal both stood up for the good and fought for two really important things, the education of girls and the ending of slavery, which has inspired me to become a lawyer. Reading nonfiction books has greatly improved my understanding of real life.

A TERM PROJECT: READING AROUND THE WORLD by Avneet in Grade 6

From reading all different sorts of stories that were set all over the world, I have learnt that all people experience both hardships and joys in life. For example, in the story An Adventure in Venice, I have learned that life is not always fair, not even on a vacation; Zoe, a little girl, loses her dog Mickey while in Italy. In A Faraway Island and A Night Divided, I have observed that when life is tough, people have to be brave; in the first novel, two Jewish sisters are sent to Austria because of World War 2 and in the second novel, Gerta’s family gets divided overnight by the Berlin Wall in Germany. In Little Red Riding Hood, I noticed that sometimes not following directions can get a person into danger; Little Red Riding Hood on the way to visit her sick grandmother does not obey her mother and is endangered by a wolf. In Desmond and the Very Mean Word, I saw that hurting someone’s feelings is very unkind; some boys shout a very mean word at Desmond which turns his happiness and joy into sadness and anger.  In Good Morning China, I discovered that almost everyone has some kind of special activity that makes them happy; in China, some children play basketball in the morning and other children water the plants. Overall, I have learnt a lot of amazing things about life! 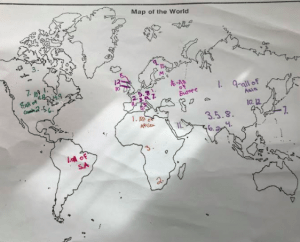 Reading Around the World by Mehtej in Grade 6

From stories, I have learned a lot about life. I learned about racism in The Last Pass: two basketball teammates were friends but one always blamed himself for not helping his friend who was an African-American in a city with a bad history regarding race; I realized that people should always help their friends. I also learned about racism in Back of the Bus: in 1955 in Alabama, Rosa Parks was arrested for not giving her seat to a white person on the Montgomery bus; I realized that it is important to do what is right even when it feels dangerous, especially when laws are unjust. I also learned about unfairness in The Breadwinner: Afghan women have to stay inside their homes unless they wear burqas because men and women are not treated equally; I realized that I am fortunate to live in a country where both men and women are treated with respect. Unfairness was also shown in Breaking Stalin’s Nose: in the 1940s in the capital of Russia – Moscow – a boy named Sasha aspires to be a Soviet Pioneer until he witnesses his father taken away by the secret police because of a false report; I realized once again that I am fortunate to live in a country that is not communist. I learned that sometimes people have to find their own ways to survive difficulties in Silent Music: Ali, who loves soccer and loud music, lives in Baghdad, a dangerous place undergoing difficult times where he has to stay quietly indoors all day, so he spends his time practicing calligraphy; I learned that I am fortunate to live in a safe country where I can go outside whenever it is safe. But now when there is Covid-19 spreading all over the world and people are told to stay indoors, I am inspired to be creative and to always have hope and to learn at home. From picture books and novels, I have learned how to live with courage when there are dangerous times. 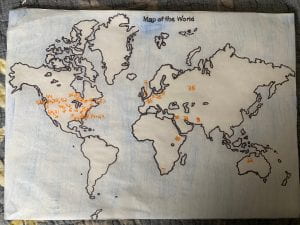