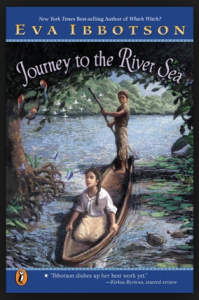 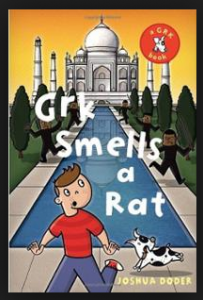 Avi. Crispin: the Cross of Lead and Crispin: At the Edge of the World. 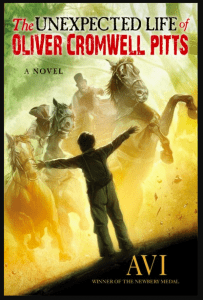 Avi. The Unexpected Life of Oliver Cromwell Pitts: being an absolutely accurate autobiographical account of my follies, fortune, and fate: written by himself. Chapel Hill, North Carolina: Algonquin Young Readers, 2017.
In 1724 England, life is perilous. Twelve-year-old Oliver’s mother died when he was born. His older sister moved from their home in Melcombe Regis, Dorset to the big city of London. And now his father has mysteriously disappeared in the middle of the night. Oliver is on the run, escaping the cruel master of the poorhouse. Quickly-paced in an old-fashioned swashbuckling style, this 313-page novel by the inimitable Avi will undoubtedly appeal to adventure lovers 11 years old and up. 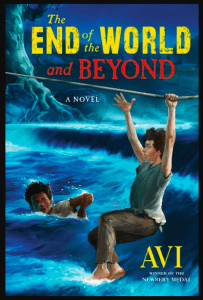 Avi. The End of the World and Beyond: Continues The Unexpected Life of Oliver Cromwell Pitts: Being an Absolutely Accurate Autobiographical Account of my Follies, Fortune & Fate Written by Himself. Chapel Hill, North Carolina: Algonquin Young Readers, 2019.
In this sequel, Oliver suffers the horrors of transport from England to America before being sold into servitude to a violent man How will Oliver escape? Will he ever be reunited with his sister and father? Full of historical details, this equally action-packed novel will appeal to readers whether or not they have read the previous novel. 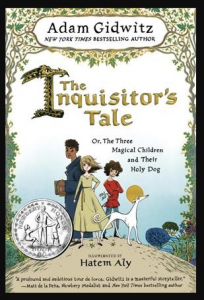 Do miracles happen?  Can hearts change? Will goodness prevail? Three travellers – a peasant girl with a mysterious greyhound, a Jewish refugee, and a boy raised in a monastery – flee persecution in 13th century France.  Illustrated in medieval style by Hatem Aly and followed by a long author’s note and an annotated bibliography, this 337-page Newbery Medal winning novel will be avidly devoured by competent readers 11 years old and up. [Adventure stories, Faith; France; Medieval life; Quests; Persecution] 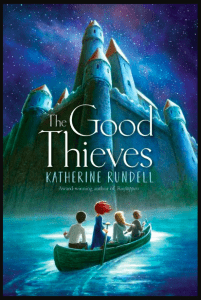 After Vita’s grandfather is swindled out of his home, she and her mother sail to New York City to take him back to England. But once they arrive, Vita comes up with a new plan: to reclaim the family mansion. With the help of newfound friends – two circus performers and a reluctant pickpocket – she sets out to accomplish her mission. Katherine Rundell accomplishes her usual magic with this latest novel set in the 1920s. Mixing the sadly all-too-real and the impossibly-foolhardy-and-unrealistic, she once again tells a rollicking tale of adventure which will inspire readers 10 to 14 years of age. Highly recommended!

Snicket, Lemony. The Bad Beginning and many more.
Trease, Geoffrey. Word to Caesar.
Wilson, Eric. Disneyland Hostage and Summer of Discovery and many more. 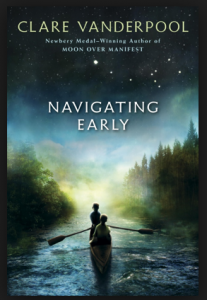 DiTerlizzi, Tony. The Spiderwick Chronicles starting with The Field Guide.
McCaffrey, Anne. Dragonsong, Dragonquest and many others.
MacHale, D.J. Black Water, The Pilgrims of Rayne, The Quillan Games, The Reality Bug and more.
Nesbit, E. The Phoenix and the Carpet.
Oppel, Kenneth. Airborn, Skybreaker, Starclimber and the Silverwing Saga.
Patterson, James. The Maximum Ride series starting with The Angel Experiment. 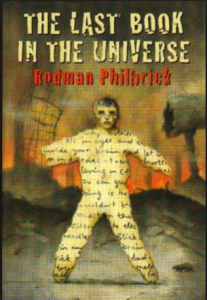 Spaz has heard about a world with books, but he has never seen one.  In his world, people use mindprobes, needles which shoot pictures straight into your mind and let you escape the grey misery of life. But then he meets an old man, Ryter, and learns the power of stories.  For readers who liked The Hunger Games or Fahrenheit 451, this thoughtful but easy-to-read novel. [Science fiction; Fathers and sons; Adventure and adventurers; Epilepsy; Books and reading] 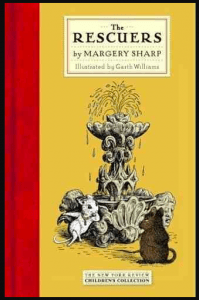 Do you have time to enjoy a classic novel of courage and adventure? Do you have the imagination to enjoy a tale of brave and noble mice? This 149-page story will capture your heart with its quietly lovely sentences. And the endearing characters will remind you that at any moment you, too, could be called on a mission to selflessly help others. “Miss Bianca, a white mouse of great beauty and self-confidence, travels with the ambassador’s son to Norway on behalf of the Prisoner’s Aid Society in a perilous mission to rescue a poet imprisoned in the dreadful Black Castle.” – CIP This edition is exquisitely illustrated by Garth Williams, the famed illustrator of countless classic stories. 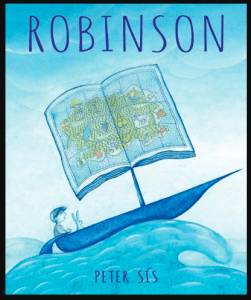 Tintin and the Picaros is a suspenseful story about a boy, Tintin, and his two friends, Captain Haddock and Professor Cuthbert Calculus. The story takes place in a fictional country called Tapiocapolis. These three gentlemen go on a riveting adventure to rescue their acquaintance, Bianca Castafiore, from jail. Bianca was falsely accused of plotting to overthrow the government of Tapiocapolis so she was sentenced to a lifetime in prison. Tintin, Captain Haddock, and the Professor were also accused of assisting Bianca in her plot, but strangely enough, the leader of Tapiocapolis, General Tapioca, invited them to stay in Tapiocapolis, all expenses paid, to exchange views on the conspiracy. Tintin, being a clever young boy, predicted that accepting the invitation would result in a dangerous outcome. Much to Tintin’s dismay, Captain Haddock accepted the invitation, thus accepting the consequences that would follow. It turns out that Colonel Sponsz, General Tapioca’s technical advisor, had planned to kill the three gentlemen because of a mishap, which caused Sponsz to be subjected to humiliation. After many attempts to escape the scandalous scheme of Sponsz, Tintin, Captain Haddock, and Professor Cuthbert, finally rescued the beautiful Bianca, while barely escaping with their lives. All in all, this story grasped me with its powerful vocabulary, and the storyline always kept me on the edge of my seat. – Sarah in grade eight

Chelsea, in grade six, read Cryptid Hunters by Roland Smith. The story takes place in a boarding school in Switzerland and could have happened even this year. In other words, it’s not set in the past or in an imaginary future.  The main characters, Marty and Grace, are siblings; Grace was adopted but neither of them know that until later in the story when they go to live with a person they think is their uncle but is actually Grace’s birth father. In the story, cryptids are creatures for whom there is no scientific evidence of their existence. But cryptid hunters go searching for them, anyway, sort of the way people sometimes search for Sasquatches. The central conflict in the story arises because Marty’s and Grace’s uncle is a cryptid hunter who goes to the Congo, in Africa, to search for these mysterious creatures. When he leaves, the two go with him but then something happens. Read this story to find out!

The Thief Lord, by Cornelia Funke, is the best book I have ever read! This novel is set in Venice, Italy, and the way the author describes it is beautiful: stone statutes of winged lions and sparkling streets of water! The main characters, Prosper and Boniface (Bo), are runaway orphaned brothers who end up in Venice where they join a band of pick-pocketing street children who find shelter in an abandoned movie theatre. Their leader is Scipio, who calls himself the Thief Lord. The two brothers make new friends on their adventure, uncover a shocking secret about their leader, and discover a magical merry-go-round in an extraordinary novel about friendship, magic, and the value of working together. (Darien in gr. eight)

Escape the Mask by Ward keeps a reader wanting more. There are two orphans in a place called Grassland and they’re captured by these people called Spears. They meet two more orphans who join them on their adventure to escape Grassland and reach Outside. This novel reminds me of other novels about future worlds. I liked it. You might, too! (Jordan)

I read Zach’s Lie by Roland Smith to my class. It was great. The main character, a boy, gets put into the witness protection once his father gets put into jail because he was transporting drugs for a cartel. The boy must keep his old life a secret from anyone he meets and his family can’t be found by the cartel. So he has to lie about everything and his name is changed from ‘Jack’ to ‘Zach’. This book kept kids interested and guessing. (Mr. Blades)

My favourite book so far this year is a book named Choose Your Own Adventures. It’s a really cool book that gives you choices. You can pick your own adventures but if you pick the wrong one, your character may die or something else not so good may happen. You need to be careful of what you choose! I really like these books. They are really interesting adventures. (Jonathan in gr. 6)