Fairy tales are short stories that are based on an oral tradition.

They are usually considered stories for young children.

Charles Perrault lived in the 1700s. Many of his stories were later changed and rewritten by Jakob and Wilhelm Grimm in Germany.

Here are some of Perrault’s stories:
__ Cinderella
__ Puss in Boots
__ Sleeping Beauty

The Grimm Brothers, Jakob and Wilhelm, lived in the late 1700s and the first part of the 1800s. They spent much of their lives travelling around collecting stories from the people they met.

Here are some of their stories:
__ The Fisherman and His Wife
__ The Frog Prince
__ Goldilocks and the Three Bears
__ Hansel and Gretel
__ Little Red Riding Hood
__ Snow White and the Seven Dwarfs
__ Rumpelstiltskin 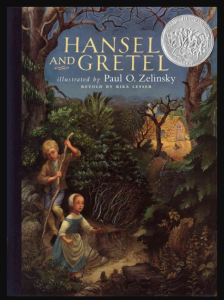 Morpurgo, Michael. The Pied Piper of Hamelin. Somerville, Mass. : Candlewick Press, 2011.
The Pied Piper pipes a village free of rats, and when the villagers refuse to pay him for the service, he pipes away their children as well. – CIP A much longer version than found in most picture books, this story is best for readers 7 years old and up. [Folklore — Europe; Germany; Pied Piper of Hamelin (Legendary character)] 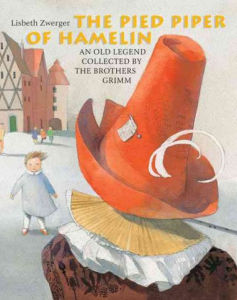 Illustrated by renowned artist Lisbeth Zwerger and translated by Anthea Bell, this version of the story is highly recommended for readers 7 years old and up.

Hans Christian Andersen lived in the 1800s. While he wrote many poems and novels, he is mainly remembered for his fairy tales.

These are some of his stories:
___ The Emperor’s New Clothes
___ The Princess and the Pea
___ The Snow Queen
___ The Steadfast Tin Soldier
___ Thumbelina
___ The Ugly Duckling

Peter Christen Asbjornsen and Jorgen Moe lived in the 1800s. Their collection includes Viking stories that were carried along to the Franks in France and the Anglo-Saxons in England.

These are some of the stories from their collection:
__ Jack and the Beanstalk
__ The Three Billy Goats Gruff
__ The Town Mouse and the Country Mouse

Read some fairy tales. Use a separate chart for each fairy tale. Record your observations.

4. Repetition
E.g. “Who’s been sleeping in my bed?” said by different characters
My story’s repetition:

5. Youngest character  is sometimes the hero
My story’s hero:

6. The ending is often happy
E.g.. the princess wakes up; the grandmother is rescued
My story’s ending:

[This page may be copied for use with students if the following credit is provided: ©2014 Sophie Rosen.]