The Caldecott Medal – named after nineteenth-century English illustrator Randolph Caldecott – is awarded each year to the artist of the most distinguished American children’s picture book. 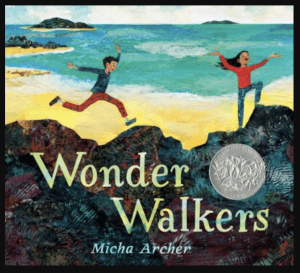 Archer, Micha. Wonder Walkers. New York: Nancy Paulsen Books, 2021.
Gorgeous double-page illustrations help tell this story of two children who go on a nature walk. Minimal text – in the form of imaginative questions – will inspire students to see the world with fresh eyes. Artists will be reminded of all the colours used by picture book author Brian Wildsmith. Teachers will want to use this picture book to introduce the literary technique of personification. A 2022 Caldecott Honor Book. Highly recommended!

2021: We Are Water Protectors by Carole Lindstrom

2020: The Undefeated by Kwame Alexander

2018: Wolf in the Snow by Matthew Cordell

2016: Finding Winnie: The True Story of the World’s Most Famous Bear, illustrated by Sophie Blackall, written by Lindsay Mattick

2015: The Adventures of Beekle: The Unimaginary Friend by Dan Santat

2009:  The House in the Night, illustrated by Beth Krommes, written by Susan Marie Swanson

2008: The Invention of Hugo Cabret by Brian Selznick

2004: The Man Who Walked Between the Towers by Mordicai Gerstein

2003: My Friend Rabbit by Eric Rohmann

2002: The Three Pigs by David Wiesner

2001: So You Want to Be President?, illustrated by David Small, written by Judith St. George

2000: Joseph Had a Little Overcoat by Simms Taback

1993: Mirette on the High Wire by Emily Arnold McCully

1991: Black and White by David Macaulay

1984: The Glorious Flight: Across the Channel with Louis Bleriot by Alice & Martin Provensen

1979: The Girl Who Loved Wild Horses by Paul Goble

1975: Arrow to the Sun by Gerald McDermott

1974: Duffy and the Devil, illustrated by Margot Zemach; retold by Harve Zemach

1972: One Fine Day, retold and illustrated by Nonny Hogrogian

1971: A Story A Story, retold and illustrated by Gail E. Haley

1970: Sylvester and the Magic Pebble by William Steig

1969: The Fool of the World and the Flying Ship, illustrated by Uri Shulevitz; retold by Arthur Ransome

1964: Where the Wild Things Are by Maurice Sendak

1962: Once a Mouse, retold and illustrated by Marcia Brown

1958: Time of Wonder by Robert McCloskey

1951: The Egg Tree by Katherine Milhous

1950: Song of the Swallows by Leo Politi

1941: They Were Strong and Good , by Robert Lawson