Looking for books about autism and Asperger’s Syndrome?

Baskin, Nora Raleigh. Anything But Typical. Simon & Schuster Books for Young Readers, 2009.
Twelve-year-old Jason wants to be a writer.  So, despite his autism, he sets out to tell his story in a neurotypical way because he knows that people like to communicate in their own language.  His story is full of laughter and sadness,  reasonable conclusions and utter confusion.  Online conversations, where people can’t tell that he dresses differently and processes information differently, help him make a girlfriend.  But what will happen when he finally meets her face to face? (Autism; Internet (Computer network); Family life; Friendship; Schools)

Brenna, Beverley. Waiting for No One. Red Deer Press, 2010.
In this sequel to Wild Orchid, nineteen-year-old Tayler lives with her mother and her pet gerbil, Harold Pinter. She is taking a biology class at  the University of Saskatchewan and trying to get a job at a local bookstore. She wants to become independent and goes to visit her father and his girlfriend in Wyoming.  Asperger’s syndrome often makes life confusing and difficult, but her ability to make unusual connections leads to surprising insights for everyone.

Choldenko, Gennifer. Al Capone Does My Shirts. Puffin Books, 2004.
It is 1935 and twelve-year-old Moose, his younger autistic sister and his mother are adjusting to life on Alcatraz where Moose’s father has a new job as a guard. But life gets complicated when Moose encounters the warden’s daughter who is used to bossing everyone else around.

Crowley, Suzanne. The Very Ordered Existence of Merilee Marvelous. Greenwillow Books, 2007.
In a small Texan town, thirteen-year-old Merilee, who has Asperger’s Syndrome, tries to live a “Very Ordered Existence” but everything seems to go out of control when a new boy arrives and starts to spend more and more time at Merilee’s house.

Dowd, Siobhan. The London Eye Mystery. A Yearling Book, 2007.
Ted and Kat try to find Salim who has gone missing in London, England. Will they find him or has he disappeared forever?  Ted’s unusual way of seeing the world might be their only hope for success in the search to save their cousin.

Ellis, Deborah. Looking for X. Douglas & McIntyre, 2002, c1999.
After her autistic twin brothers are placed in a group home outside of the city, eleven-year-old Khyber befriends a homeless woman in Toronto. 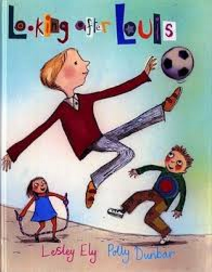 Ely, Lesley. Looking After Louis. Albert Whitman & Co., 2004.
Expressive illustrations by Polly Dunbar add humour to this picture book about a class with a new student, a boy with autism who repeats what others say, and a patient teacher, who shows them that they are all unique human beings.

Erskine, Kathryn. The Absolute Value of Mike. Philomel Books, 2011.
Fourteen-year-old Mike is great at engineering events but terrible at math, much to the dismay of his eccentric mathematician father. [Self-acceptance; Summer; Pennsylvania; Fathers and sons; Adoption; Eccentrics and eccentricity; Individuality; Mathematics; Grief]

Erskine, Kathryn. Mockingbird. Philomel Books, 2010.
Set in Virginia after a school shooting has killed her mother, ten-year-old Caitlin’s unique way of seeing the world, due to Asperger’s syndrome, turns into a gift that helps her and her father cope with their grief.  Her determination to understand emotions and make friends is humorous, heartwarming and inspiring.

Kochka. The Boy Who Ate Stars. Egmont, 2004.
Translated from the French by Sarah Adams, this short novel describes twelve-year-old Sarah’s adventures when she meets Matthew, a four-year-old autistic boy who lives with his mother in a neighbouring apartment. Her puzzlement turns to wonder as she learns to see the world in an entirely new way: “You only see with your heart, because your eyes miss what matter” (84).

Lord, Cynthia. Rules. Scholastic, 2006.
Twelve-year-old Catherine has enough trouble with her autistic brother, she is sure. But when she becomes friends with a parapalegic boy, life becomes even more complicated. Will opening her heart help life become more enjoyable?  A Newbery Honor Book, it is on the ERAC recommended novel list for grades 5 and 6. 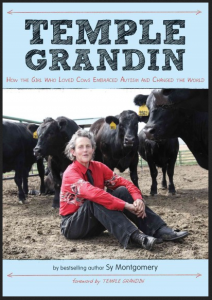 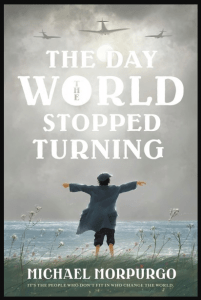 Morpurgo, Michael. The Day the World Stopped Turning. New York: Feiwel and Friends, 2019.
A teenager, tired of his studies in England, travels to France where he discovers a story from the second world war: An autistic boy and a Roma girl had met in a village and become friends. But when German soldiers had invaded, their lives were in danger. All Morpurgo’s novels are competently written, but most are for younger readers. In contrast, this sophisticated coming-of-age novel is highly recommended for thoughtful readers 12 years old and up. [Autism; Flamingos; France; Human-animal communication; Roma; World War 2] 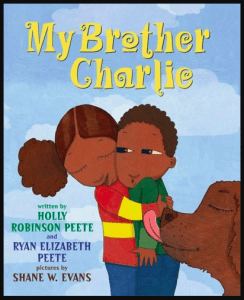 A heartwarming story about a brother with autism. In an afterword by the authors, the mother and twin sister of an autistic boy tell more about their own real-life experiences. Illustrated by acclaimed illustrator Shane W. Evans, this picture book is highly recommended for children 5 to 12 years old.

Rodowsky, Colby. Clay. HarperTrophy, 2001.
Eleven-year-old Elsie and her younger autistic brother try to cope when their parents divorce and their mother moves them from place to place in an attempt to keep them hidden. This novel could be compared to So B. It by Sarah Weeks, Waiting for Normal by Leslie Connor and The Rules of Survival by Nancy Werlin. (Kidnapping, Parental; Brothers and sisters; Divorce; Autism; Moving, Household; Courage; Mother and child; Secrets; Fear; Courage)

Roy, Jennifer. Mindblind. Marshall Cavendish, 2010.
Fourteen-year-old Nathaniel thinks that life will be so much better for him if he can only prove that he is a genius. His quest exasperates his mother with whom he lives and irritates his father who is determined to have a “normal” son.  It is his friends, finally, who come to his rescue and show him he can have fun with both people and mathematical formulas in his life. [Divorce; Asperger’s syndrome; Rock groups; Genius; Fathers and sons; Stepfamilies; Mathematics; Dating (Social customs)] 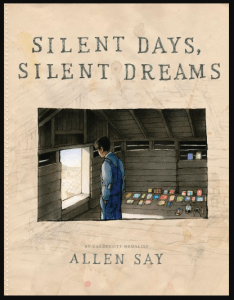 Stork, Francisco X. Marcelo in the Real World. Arthur A. Levine Books, 2009.
Seventeen-year-old Marcelo encounters injustice and discovers romance when he gets a job working in the mail room of his father’s law firm.  Filled with humour and realism, this young adult novel is best suited for teen readers. (Autism; Dating (Social customs); Fathers and sons; Music; Young adult fiction)

Vanderpool, Clare. Navigating Early. New York: Delacorte Press, 2013.
“Odyssey-like adventure of two boys’ incredible quest on the Appalachian Trail where they deal with pirates, buried secrets, and extraordinary encounters.” (Provided by publisher.)  Jack has to leave Kansas behind after his mother dies and his father, a naval officer, sends him to boarding school in Maine. Only when he meets Early Auden does he finally start to come alive again. A wonderful adventure story, highly recommended for readers 8 to 13 years old. In an afterward, the author writes that her characterization of Early was inspired by reading Born on a Blue Day by autistic savant Daniel Tammet but did not mention autism in the novel because it would not have been diagnosed when the story was set, in 1945.   [Adventure and adventurers; Boarding schools; Eccentrics and eccentricities; Grief; Historical fiction; Maine]

The main character in the story Lies by Michael Grant (HarperCollins, 2010) is Sam Temple. After a nuclear disaster, a young autistic boy with special powers puts up a dome over an entire city.  After the disaster, many people are left with strange nuclear powers. Sam is 14 years old, but he is the most powerful mutant in the entire city. Just to make things worse, every person over the age of 15 has disappeared! Food is scarce, and it’s up to Sam to provide for a city of 400 kids. Throughout the story, he faces extremely stressful situations and deals with impossible problems.
I think I have felt similar emotions as Sam.  In grade 7, we had a group science project to complete on Antarctica. I think I had the laziest group ever and I was left to do most of the project by myself.  I had to figure out how to design the project and do most of it on my own. (It’s not exactly as extreme as Sam’s situation but it was still pretty stressful!) Needless to say, I still got an A on my project. It just goes to show that you don’t always get what you want in life but if you try hard enough, you will most likely be happy with the result! (Brandon in grade eight)