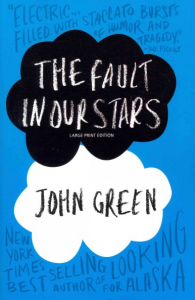 Reliability: I could tell The Fault In Our Stars was reliable because the author, John Green is very popular and has written many other successful books. This one in particular has been TIME Magazine’s #1 Fiction Book of the Year, #1 International Bestseller, #1 Indie Bestseller, #1 Wall Street Journal Bestseller, USA Today Bestseller, and #1 New York Times Bestseller. It also has excellent reviews from TIME Magazine, Entertainment Weekly, The Atlantic, NPR.org, The Sacramento Bee, People, Parenting, Booklist, starred review, Markus Zusak, author of The Book Thief, and Jodi Picoult, author of My Sister’s Keeper, and Sing You Home.

Category: The Fault In Our Stars follows a problem solving pattern: person versus nature. In this case, nature is a disease. Hazel Grace and Gus , meet in a cancer support group. Hazel, obsessed with a book which ends right in the middle of a sentence, lends it to Gus.  A charitable organization has promised Gus a dying wish, and so the two cancer patients fly to Amsterdam to meet the author. What a disappointment!  The author turns out to be a jerk. Hazel and Gus decide to make the best of their trip and enjoy the sights of the city, but during their last days in Amsterdam, Gus tells Hazel that his cancer has returned and spread throughout his body. After he dies, everyone around him is filled with grief. And so, the conflict in the novel is resolved in an unusual way. While it appears that nature – cancer – has won, Gus’s positive impact on so many lives means that he will actually continue to live in the memories of the people he loved.

Short Annotation: Hazel and Gus, who are both fighting cancer, go on a breathtaking adventure together. This 313 page-novel vividly shows how many people around you appreciate you more than you think.

Connection: My connection to The Fault In Our Stars by John Green is text to self. My family has had a lot of losses due to cancer. In 2013, we lost 3 people in 3 months. One of them was very close to my parents. He battled cancer for 7 years, and was in remission for a total of about 18 months. When he was first diagnosed, they found the cancer in his lungs, even though he had not been smoking. One third of his lung was removed. After that, they found a tumour at the base of his spine which caused him lose the ability to walk. The doctors then found lesions in his brain and lungs. The cancer was first found while his wife was pregnant with their first child. He did not start his medication until their second child had been born. There is a group called the Dark Horse Riders, which he took part in, who ride in a bike ride called Ride to Conquer Cancer. He used it as a distraction from being sick, similar to how Augustus distracted Hazel by taking her to Amsterdam. Every year, the Dark Horse Riders still ride in his honour and have his name on their bikes. Towards the end of his life, meditation was another distraction for him, and my mom was his guide. My mom says the meditation helped him appreciate his life, and while doing this, she learned to appreciate hers.