Over 60 years ago, a French philosopher wrote that technology treats people like machines. He argued that new technologies take away people’s freedom. They damage the natural world. And developing them involves so many people that no one ever has to take responsibility for problems that arise.  Jacques Ellul wrote many books about technological tyranny. 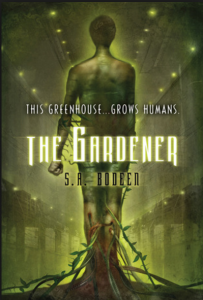 Bodeen, S.A. The Gardener. New York: Square Fish, 2010.
“When high school sophomore Mason finds a beautiful but catatonic girl in the nursing home where his mother works, the discovery leads him to revelations about a series of disturbing human experiments that have a connection to his own life.” – CIP.  A well-plotted novels recommended for readers 12 to 16 years old. [Fathers; Runaways; Science experiments; Secrets; Single-parent families]

“Technology gives us power, but it does not and cannot tell us how to use that power. Thanks to technology, we can instantly communicate across the world, but it still doesn’t help us know what to say.” – Jonathan Sacks

Hughes, Monica. Devil on My Back. Methuen, 1984.
What if you didn’t have to study for tests or practise to learn new skills?  What if a computer programme could simply be inserted into your brain and you would know everything you needed to know?  But what if a programme was inserted that made you unquestionably obey any orders?  Would you really be able to enjoy freedom? An older but highly recommended novel for 12 to 15 year olds.

“Men have become the tools of their tools.” – Henry David Thoreau 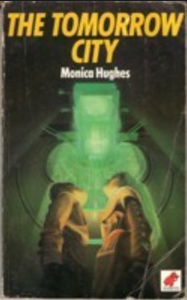 Hughes, Monica. The Tomorrow City. Metheun, 1978.
Caroline and David try to escape from a computer-controlled city which seeks to control all the inhabitants, as well. Another older novel but still highly recommended for readers 11 to 15 years old. 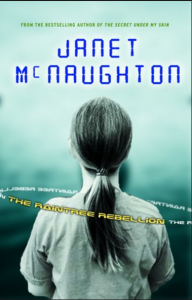 McNaughton, Janet. The Raintree Rebellion. Toronto: HarperTrophy Canada, 2006.
Eighteen-year-old Blake and her adopted mother return to Toronto in a future world that is struggling to survive after a technocaust. While her mother works on a justice council, Blake discovers that a microchip in her arm holds surprising and unwelcome information. This sequel to The Secret Under My Skin is a compelling and believable novel for 12 to 17 year olds. [Toronto, (Ont.); Science fiction; Identity; Secrets; Environmental degradation; Terrorism] 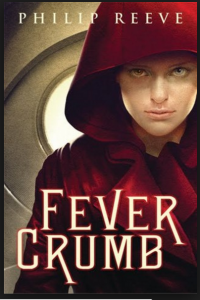 Reeve, Philip. Fever Crumb. New York : Scholastic Press, 2009.
Fourteen-year-old Fever has been trained as an engineer in a futuristic culture which believes women are not capable of rational thought.  When she leaves her home in London, she makes suprising discoveries and faces unexpected dangers.  For 12 – 16 year-olds. [England; Foundlings; Identity; Science fiction; Technology]

A nonfiction book for adults: Nikiforuk, Andrew. Slick Water: Fracking and One Insider’s Stand Against the World’s Most Powerful Industry. Vancouver: Greystone Books, 2015.

“It has become appallingly obvious that our technology has exceeded our humanity.” – Albert Einstein