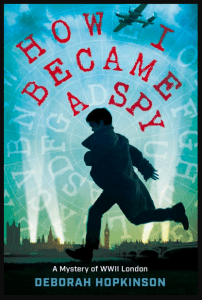 Hopkinson, Deborah. How I Became a Spy. New York: Alfred A. Knopf, 2019.
In World War 2 London, thirteen-year-old Bertie tries to solve a mystery: what has happened to the owner of a coded notebook? Eleanor, an American girl, and David, a Jewish refugee, join him and his dog Little Roo as they race to prevent a double agent from telling secrets to the Nazis. Told from the first-person point of view, this surprisingly cheerful story will appeal to readers 11 to 13 years of age.