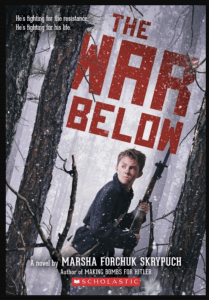 Skrypuch, Marsha Forchuk. The War Below. New York : Scholastic Press, [2020].
Luka – having escaped from a  Nazi labour camp and on the run – desperately wants to return to his home in Kyiv, Ukraine. Hiding in a forest, he meets Martina, also on the run from Soviet and Nazi soldiers. Based on actual events, this fast-moving 240-page novel – originally published as Underground Soldier in 2014 – tells the story of how two young people become involved with the Ukrainian Insurgent Army fighting for Ukraine’s independence in 1943. Readers 11-years-old and up who are interested in learning more about Ukraine and its history will be amazed at all the details in this novel by an acclaimed Ukrainian Canadian writer.

Another novel set in Ukraine