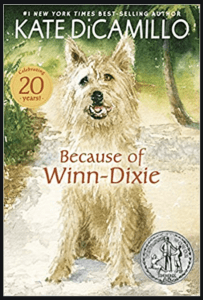 Students write essays after reading aloud together in class…

“‘There ain’t no way you can hold on to something that wants to go, you understand? You can only love what you got while you got it.’” (159). Gloria Dump tells this to India Opal, a ten-year-old girl, when she does not want to give up looking for her beloved dog, Winn-Dixie. Opal has faced many losses; she has lost her mama, and at the beginning of the book, she moves to Naomi, so she has no friends. But then, she finds a stray dog in a Winn-Dixie grocery store. She adopts it to save it from the pound and names it Winn-Dixie. She loves that dog, but then a storm comes. Winn-Dixie has a pathological fear of storms, so he gets scared and runs away. Opal keeps looking for him because she loves him, and cannot bear to lose him, like she lost her mama. Winn-Dixie is her only true friend. He has changed Opal’s life: he has made Opal’s relationship with her father stronger, taught her to be kinder, and also taught her how to make friends. She loves Winn-Dixie with all her heart, so she keeps looking for him.

Most of the characters in this novel have faced losses, which is why this sentence by Gloria Dump is   important. Opal has lost her mom, Opal’s Dad has lost his wife, Gloria Dump has lost her eyesight, and Amanda has lost her five-year-old brother, Carson. All of them know that they will not be getting those people or things back because they know that they can’t make anything or anyone stay. Opal copes with losing her mom by remembering her and by loving other people in her life. Opal’s Dad copes with his wife leaving by realizing that she left him something before she went away, his daughter. Gloria Dump copes with losing her eyesight by looking forward to Opal coming and talking with her. Amanda copes by still loving her brother and thinking about him.

Other novels also portray the truth of Gloria Dump’s statement: “‘You can’t hold on to something that wants to go, you understand? You can only love what you got while you got it”’. In the book Words on Fire by Jennifer A. Nielsen, Audra loses her parents but knows that she can still love them even though she cannot make her parents come back. She copes by knowing someday the world will be better. In Loot by Jude Watson, March loses his dad but still loves him, even though he knows that his dad will never return. He copes by knowing that his dad also loves him. In another novel by Jennifer A. Nielsen, Resistance, Chaya loses her sister but still loves her even though she will never see her again. Chaya copes by knowing that she could not do anything to make her sister stay; she copes by knowing it was not her fault and that her sister loves her.    – Gurmuskaan in grade six 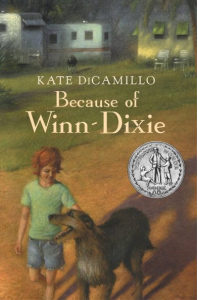 ‘’ ‘…you can’t hold on to something that wants to go….You can only love what you got while you got it’ ’’ (159). Gloria Dump says this to the main character, India Opal Buloni, when she does not want to give up searching for her disoriented dog, Winn-Dixie who has run away because he has a pathological fear of thunderstorms, which means ‘’ ‘ a fear that goes way beyond normal fear. It’s a fear you can’t be talked out of or reasoned out of’ ’’ (75).

Opal is a 10-year-old, not well-educated girl who has just moved to Naomi, Florida with her father, a busy preacher. She feels very lonely because she has no one to spend time with. She adopts an ugly, big, disoriented dog, and names it after the store she found him in, Winn-Dixie. After that, she learns what true friendship means- friendship for most people is a combination of affection, loyalty, love, respect, and trust. Friendship goes beyond just sharing time, and it is long-lasting. Opal makes new friends, Miss Franny- a librarian-, Gloria Dump- an old woman-, Otis- a quiet man who offers a job to Opal, Sweetie Pie Thomas-, an outgoing 5-year-old who loves dogs-, Amanda Wilkinson- a 10-year-old pinched face girl whose brother drowned when he was 5-years-old; all thanks to Winn-Dixie for taking all the loneliness out of Opal’s life.

Opal realizes what Gloria Dump is saying is reality. She has to accept the truth that her mama will not return. So she goes up to Gloria Dump’s mistake tree and says, ‘’ ‘Mama’ as if her mama was standing right beside her, ‘I know ten things about you, and that’s not enough…. But daddy is going to tell me more… he knows you’re not coming back. He misses you and I miss you, but my heart doesn’t feel empty anymore…. I’ll still think about you, I promise. But probably not as much as I did this summer’ ’’ (177-178).

In other books, this truth about letting go is also shown. For instance, in Cinnamon Moon a twelve-year-old, Ailis, and her younger brother, Quinn, survive, but their family does not. Ailis and Quinn are taken by a family acquaintance to live in a boarding house in Chicago. They both know that their parents won’t be returning, so they let go of their sadness and love what they now have- a sweet six-year-old named Nettie, who is also an orphan displaced by Chicago’s fire.

In my own life, there has been a loss. My parents had to leave their loved ones back in India, Asia. For example, my dad had to leave his affectionate grandma, and her stories; he tells me about how they used to play games and do all types of leisure activities together. I still sometimes hear him saying, ‘‘I miss her so much’’ and ‘‘I want to go visit her.’’ But he can’t go because of Covid-19. So the sentence ‘‘ ‘…you can’t hold on to anything that wants to go…. You can only love what you got while you got it’ ’’ is also true for me and my family. – Sunmeet in grade six 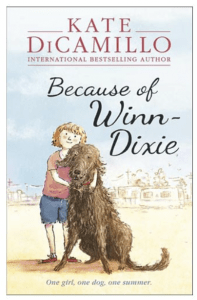 “‘ There ain’t no way you can hold on to something that wants to go, you understand? You can only love what you have while you got it ‘” (159). Gloria Dump – the wise character in the novel – says this to ten-year-old Opal – the main character – when she does not want to stop searching for her dog, Winn-Dixie. Winn-Dixie has a pathological fear of thunderstorms, and Opal is having a small party outside with her friends when the sky starts to get very dark and gloomy. Only a second later, it starts raining; there is lightning flashing in the sky and thunder roaring in the distance. Opal and all of her friends dash into Gloria’s house to stay dry (154). As soon as Opal starts to get settled into Gloria’s warm and dry home, she realizes that Winn-Dixie is nowhere to be found. Everyone starts searching, but no one can find him (157). Opal and her father go outside to search for Winn-Dixie but still, there is no sign of him. Opal is calling and searching for what seems like forever. She does not want to give up, because she has already lost her mother and does not want to lose anyone else.

The main character, Opal, realizes something about her own life. She realizes that she should focus on what she has now and not what she does not have. For example, she realizes she should stop being sad about her mother and should be happy about all the new friends she has made. She finally accepts the fact that her mom will never come back. 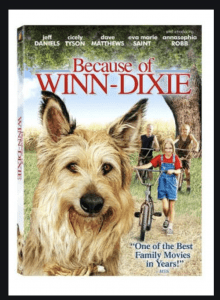 “…You can only love what you’ve got while you’ve got it”(167). Gloria Dump says this when India Opal – the protagonist,  who lives in Naomi, Florida –  wants to find her precious  lost dog -Winn-Dixie- who is lost because of a pathological fear of thunderstorms, which are frequent during Florida’s warm summers.

Opal says “I am not ready to let Winn-Dixie go” (167). She is thinking about her mother, and how she let her when she was a very young girl. Then she thinks about the preacher and how he feels about losing his wife and her mother. Finally, she thinks about Winn-Dixie and how he must have felt for being alone for so long with no one to take care of him during his darkest days and nights.

In real life, this relates to me as well. I was not ready to lose my Grandpa when I was six. Then I thought about my dad, who must have felt like his world had just shattered into pieces, because his father meant everything in the entire world to him. My Grandpa helped my father come to Canada, helped my father pay for most of the expenses, helped my father study when he was in school, taught him how to show manners and respect to others, taught him how to cook his own meals, supported him when he won medals and games. As a result, my father became an honorable, brave and humble young man. – Gurtaj in grade six

Read more sentences – found in novels – that are true to life.