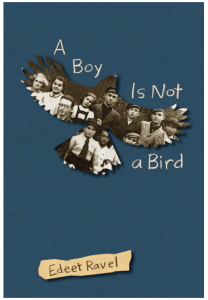 Ravel, Edeet. A Boy Is Not a Bird. Toronto: House of Anansi Press/Groundwood Books, 2019.
Eleven-year-old Natt’s comfortable life comes to an end when Russian soldiers invade his eastern European town during the summer of 1940. Hebrew schools are closed. Markets are shut down. Homes are confiscated. At first, Natt tries to cheerfully adjust to the Soviet occupation. But his perspective changes when food becomes scarce, his father is arrested, and he and his mother are put on a cattle train headed for Siberia. He recalls his father’s words: During a war, every day you can stay alive, you are a hero. Based on the true story of the author’s fifth grade teacher, this vivid 221-page novel is highly recommended for mature readers 11 years old and up.

P.S. Readers of Breaking Stalin’s Nose by Eugene Yelchin may wish to compare how the two main characters – Natt and Sasha – both stop admiring Stalin after their fathers are inexplicably arrested.

More stories about Russia and Ukraine